The Minus Faction by Rick Wayne Review 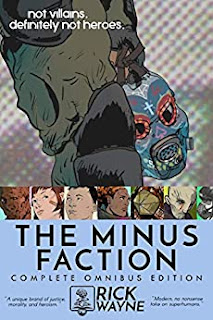 Title: The Minus Faction
Author: Rick Wayne
Year: 2017
Pages: 782 pages
Rating: 4 of 5 stars
I hate superhero novelizations. These types of books try to take a comic book character from a visual form of media and place them in a verbal or textual world. The problem with that is the hero or heroes always escape back to the visual media. It's never good.
So, why I am reviewing Rick Wayne's The Minus Faction? Because these superheroes were created in the form of a novel from the get-go. John Regent feels like a characterization in the novel. Mr. Wayne managed to fuse the superhero tropes with real-world speculative fiction to create a strong cast of characters in a series of stories. The characters and the threats seem real, the storytelling is as a work of fiction should be.
The Minus Faction starts with John Regent, a grizzled veteran of many black operations. Disabled, he is pulled out of his former world of adventure and thrust into a wider, wilder world of fantastic threats. John is forced to come to terms with both his abilities and disabilities while fighting against forces he does not understand.
Along the way, John picks up a collection of misfits that he must forge into a team worthy and able to take on the new arising threats to themselves and the world. Xana, Ian, and Wink join John Regent, each bringing a host of dissimilar powers and problems to the team, which makes John's life more challenging, not less. Xana is seeking her son, Ian is on the lamb from the government and Wink is... just Wink. As individuals, their powers are ill-suited to their personal tasks, but as a team, they can fulfill their goals and desires. Along with John, Xana, Ian, and Wink, a collection of secondary characters join the team to either assist or create new challenges for them.
Mr. Wayne wrote this series in an episodic fashion in 7 books, which lent itself the escalation of challenges and the introduction of the four main characters in a believable and enjoyable fashion. In order, the episodes or novels are:
Breakout
Crossfire
Meltdown
Blackout
Aftershock
Shockwave
Outbreak
All of the above links go to Amazon.com, for which I receive renumeration.
This is how I became hooked on the series, through the episodic releases. However, by book three, Meltdown, I cut to the chase and picked up the Omnibus Edition which included all seven stories plus bonus features. Aside from the collection of these bonus features, the individual books are no different than the Omnibus. In fact, some of the bonus features appear in a slightly different form, which is neither intrusive nor disjointed. There is a soundtrack, fan art, and behind-the-scenes information on how this collection came to be plus links to Mr. Wanye's social media outlets.
Mr. Wayne uses these bonus features to expand the world he has created, taking the reader on a journey that matches the adventures of John, Ian, Wink, and Xana. This is how new heroes are made in the 21st century.
Posted by Phil Viverito at 11/22/2021 09:53:00 AM No comments: