In the Star Frontiers System, canon says there is no artificial gravity. All deckplans are laid out in stacks of decks where the engines are down. When thrust is applied, the ship has gravity by virtue of thrust. 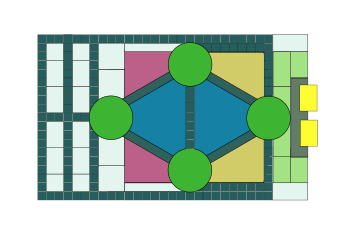 I used Inkscape to rough up a copy of the map. The light green areas are the bridge, purple are the engines. Early in the mission, the power goes dead, so you can't even say that having the engines pointing downwards out the bottom of this map helps.

It's a pretty big flaw. Maybe... maybe not. I love the Serena Dawn and I have a simple solution to fix it within canon.

I roughed out a side view of the ship.

Obviously, this is just the regular map projected sideways. Even adding details like the higher roof on the storage bay (blue-gray), the computer room (yellowish-brown), projecting the life pod (yellow) and the engines (purple) don't help.
Or does it?
What if the Serena Dawn is a Tumbling Pigeon ship? It rotates to create artificial gravity. There is an issue with this. The ship is 38 meters wide by 14 meters tall by 62 meters long. And it's shaped like a brick.
Buuuuuut. What if this is just one deck. We are told there are observation domes, rec rooms, 1st class and fuel someplace off the map. I didn't extend the map of this deck by enough to show all of this. It also creates a problem where there is no shuttle bay mention and the ship doesn't look aerodynamic enough to land. So how does this help?
Behold, the whole of the Serena Dawn! 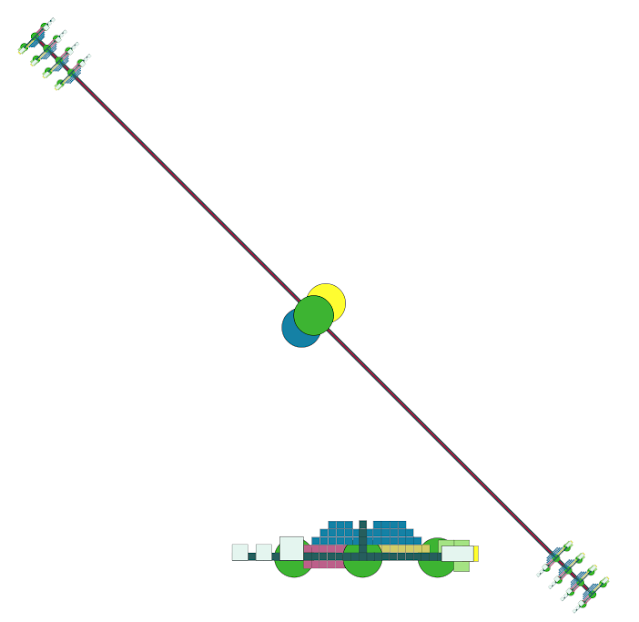 Oh, that makes a difference!
The Serena Dawn is a tether ship. In order to have gravity without power or thrust, the whole ship revolves. No power, no problem! So if the engines are on the bottom of each deck, how does it thrust?
That tether is out of scale. By a lot. The indivual decks pull themselves up the tether to the center point, apply thrust in one direction and as the ship stops thrusting the decks lower themselves down each end of the tether. When they reach the end, they apply thrust sideways at either end to spin for gravity.

One last problem to fix. How do the characters get off the ship and land on the planet? There are no shuttles and no capacity to land. Except one. Each side of the ship has a stack of decks. When they arrive at the planet, the bottom most deck is released. It's whipped away to the planet by the rotational speed being translated to a straight line by letting go of the tether. The engines point down to give some deceleration, but it would probably use screens to aerobrake. It would be hard on the screens, so I would think they would be one time use.
The whole deck enters the atmosphere as a unit and serves as a base. Assuming the deck as lander can't get off the planet again, it has the yellow escape pods that can boost the characters back to orbit for pick up. Or an Assault Scout picks them up. Either way, the puzzle of the Serena Dawn has been solved, with heavy canon.
Posted by Phil Viverito at 11/11/2020 11:37:00 PM 8 comments: