A Vance A. Study in OSE NPCs 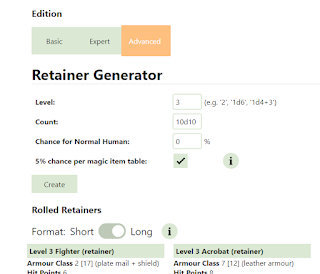 In the last post about OSE, Vance A. commented that the Old School Essentials had character generators, specifically for NPC, Travelers, and so on. He didn't know how the distribution went, so I took a shot to figure it out.

Before I dive into that, I would like to take a moment to thank Vance and anyone else who took the time to comment. I find that comments and shares are far better than a random like or emoji that I get elsewhere. Comments let me in on the mind of the readers and they are a report of the reception of posts I share. I love the comments, thank you very much.

The best tool seemed to be the Retainer Generator. I set it to 0 percent chance for normal humans and asked it to generate 10d10 characters at 1st and 10d10 3rd level characters. I will repurpose them for my upcoming campaign and other projects, so I didn't burn electrons for nothing.

I used my NPC breakdown sheet as a tally sheet.

And you know what I discovered? Random is random.

I generated 111 characters and this is just not enough to detect anything but the most basic trends. Certain classes and races seem more popular than others. However, judging by the 18 Bards I rolled, I could just be ascribing a personal point of view to a small series of choices.

It was an interesting experiment in Random.

While this generator was meant for retainers, the resulting characters seem just fine for PCs. I'll be using them for that and more. You can check out all of the OSE generators at this link.