I am parring down my hardware greatly for 2017. On the Macintosh side, I aim to get down to 6 machines. Let's review them in order: 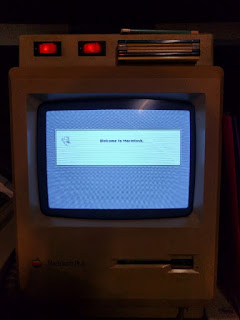 This machine is a workhorse. It arrived in my hands back in 1986 and has worked nearly continuously over the past 30 years. Back in 1987, the machine has a meltdown which was caused by heat. As you can see from the picture, I equipped it with a fan.

The Macintosh Plus is a 8 mHz machine with 1 MB of ram. I hesitate to upgrade it further due to the previously mentioned heat problem. The Mac Plus has a 400 K internal floppy drive, an external 800 K floppy drive and an 88 MB Syquest drive, all in working order.

Since I have only one 88 MB disc, I intend to hack the Syquest hardware into a hard drive case.

The Mac Plus is running system 3.0 and Finder 4.0. I plan on finding some more recent software for the system. In theory, it can jump up to System 7. 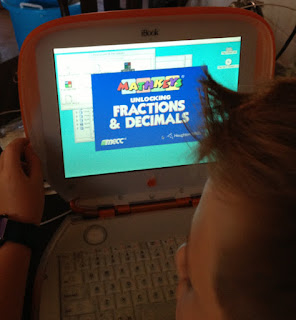 This is a relatively new addition to my home.

Currently, it is loaded with educational software and is often used by my children, as you can see from the picture to the right.

Ideally, I would upgrade the hard drive, but taking these machines apart is a monster. I think I will settle for a low profile USB thumb drive for auxiliary storage. It could also use an airport card and new battery.

I hope to do a review of each and every piece of software on this machine. 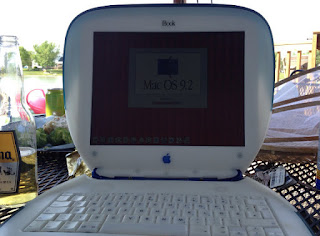 My Blueberry iBook is my go to machine. It has been through a lot and it is starting to show. I have it paired with a Wacom Bamboo tablet for artwork.

The CD-ROM no longer works, owning to the fact that the System has been borked twice with the wrong disc. I purchased this item off of eBay for all of $15.00. It appeared that someone attempted to load OS X on it and utterly failed. Additionally, the installed OS was a crylic based language. I managed to get it working, only to screw up and delete it. Since I lacked the original discs, it took some might big hoops to reinstall OS 9.2.2 and Finder 9.2.

The machine runs at a peppy 366 mHz, owing to the 320 MB of RAM. It isn't worth the effort to turn on Virtual Memory as the machine only has a 12 GB drive. It has an Airport card which still works in a great number of places and Classilla for a web browser. I also have the ability to switch to OS X, but it is Kodiak, OS 10.0.3. It's weird, so I don't do it.

Very often, this machine comes with me to camp. I have a relatively new after market battery and use a RAM disc to get the most of out a single charge. It will last about 5 days of light use. 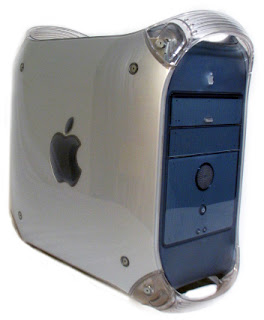 The G4 is a Sawtooth, so unfortunately, it cannot run anything less than 9.2.2. One hard drive holds copies of old operating systems for my older machines. Another boots 10.0.3 and a second boots 10.3. The last drive is used purely for backup.

I do like this machine a lot but don't have time to keep up with it as much as I would like. In the future, I may upgrade the speakers with something better than the standard one.

Ah, Carl Sagan. I haven't turned this machine on in a decade. I mean to have this one up and running in 2017.

I have two Performas. a 6300 CD and a 475 LC. Neither are in good shape. The 475 is my survivor. It met a terrible fate after being loaned to the Buffalo Museum of Science. It was left in an open top tote, in the back of a pickup truck from November to May, in Buffalo. It had been covered in mud, submerged and frozen several times by the time it came back to me.
Surprisingly, the 475 still boots. I don't know why or how, but it does.

The 6300 CD is not so lucky. I don't know what happened to it, but it is actually rusting in some spots. I didn't think that could happen. It will be cannibalized for parts, as will my snow white iBook and white iMac.

The iBook has the classic logic board problem and the iMac met a fate stranger than fiction.

I took my daughter to see the movie Wall-e and Wall-e happens to make the same sound as the iMac on boot. My daughter decided to "go to the movies" and inserted her movie ticket into the slot drive. Surprisingly, the machine took it. What it objected to was all of the loose change she fed into it.

There should be a service issue for this. The first time this happened, I found that sitting crosslegged on a bed and placing the iMac on my lap, then bouncing gently cause the offending movie ticket to fall out of the slot. You should not bounce so hard that the machine leaves your lap. The slot should be positioned over the space between your legs. (Did I just say that? I'm sorry, I don't have other words to describe something so stupid.)

It worked for playing cards and credit cards and the odd coin. It did not work when my daughter put $4.00 in assorted change inside the slot. I would have to say bouncing the machine on my lap in this over-full state did it no good at all.