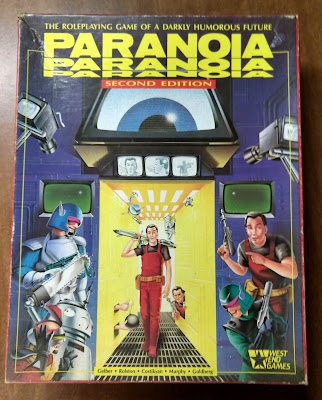 Let's start with the basics. Paranoia has been around for decades. This edition was produced by West End Games in 1987. It is a revamp of the first edition rules, which strips out much of the game mechanics in favor of pop-the-clutch-and-go fun. What was "removed" often ended up as an optional rule, which in the spirit of the game, could be ignored, introduced or changed willy-nilly during play. Players who claim to know the rules are deemed traitors and kills. So, computer, have at it. Whatever makes your players happy. And Happiness is Mandatory!

What does the game include?


The rule book includes a mini adventure demo in the front and a longish scenario or module in the back. The artwork is wonderful, while not perfect or extraordinary, it captures the theme of the games mind-bending laughs with a touch of sarcastic paranoia. This edition was compatible with all first edition modules, which is nice.

Game play is quick. Each player is entitled to 6 clones, one at a time to represent the player's character. Unless the computer decides otherwise. As one character dies, another clone appears to take his or her place. Sometimes, they remember what happened to the last clone and sometimes they do not. Unless the computer is optimistic about the lethality. In which case, a second, third or 20th clone can be played at the same time as the other 1, 2, or 19. This will increase the likelihood that the player will turn on themselves, leaving other players bemused, horrified or shocked.

In one session, I had a player holding 20 character sheets like a hand of cards and when he dropped sheet, that clone died. The book is chocked full of insane tips for pushing the charac... er... playe... er... maybe character's? paranoia buttons. My personal favorite is reading room descriptions with a stryofoam cup over your mouth to simulate a broken speaker.

For a game that revolves around comedic death, the character creation process is robust. As are the choice of weapons and suggestions as to when to use them on your friends.. There seems to be a section on combat, but it is sort of optional. Except the coveted rear position, Troubleshooter. The motive and ability to bushwack other players is fun. Fun leads to happiness and Happiness is Mandatory!

The included 19 page module, "Into The Outdoors with Gun and Camera" is laugh out loud funny. It works in tandem with the rules, basically forcing the players and computer through most of the rules.

One issue I see with this set is the concept that the computer is ruthlessly hunting for "Traitors", a concept that was awesome and understandable in The Cold War, but perhaps won't play well with younger people today.