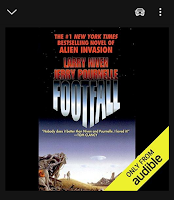 I explored two different versions of this title: the ebook and the Audible version. Both have their flaws, but of the two I found the ebook superior until the final 100 hundred pages where the Audible book is by far superior. Niven 'n Pournelle are a dynamic duo, the authors of dozens of books together. And they fit together nicely as it is difficult to sense a shift of voice that can happen with two authors. However, this is a weakly told story with many flaws.

I find Footfall difficult to review as it doesn't really fit with my reading habits. It's iron-hard science fiction in the guise of a summer blockbuster. It's tough on the reader. Back in 1985, I am sure that it was groundbreaking but over the years, 75 to 85% of the book is dated to the point of being trite. The ebook edition leads with a cast of characters that is longer than the chapters of books I have read. The Audible version experiences many near-failures with trying to render an alien language which makes the narrator sound like he is having a stroke. It really wasn't Andrews' fault, it was the story.

In order to get through the review, I will ignore the flaws and get right to the 5 W's and H questions. In 1995, the Soviet Union is winning the Space Race and the Americans are deeply concerned as a mysterious spacecraft is spotted near Saturn. As the craft approaches Earth, a cast of easily a hundred characters in the United States and the Soviet Union band together to welcome our first contact aliens, the Fithp.

Niven and Pournelle flesh out these aliens to an insane degree. They have a language, a homeworld, a collection of technology, and psychology. They are elephant-like creatures with superior firepower and a herd mentality. The authors hang out the lampshade on war-like, herd animals right at the outset and screw in a strobe light so the reader never forgets it.

First contact goes as well as you can expect, with a human delegation on the Soviet space station taken captive as all infrastructure for communication and war-making was bombarded from orbit. Much of the American countryside was laid to waste and the story shifts from the East and West coasts to the heartland states.

As the human captives were interrogated, the reader and the humans learned more about the Fithp than the Fithp learned about humans. As I said, the lampshade non-preditors having war machines was unavoidable. Back on Earth, President Coffey moved his office and command to the Cheyenne Mountain Complex. The best and brightest minds were assembled like the Avengers, everyone from scientists and military men to the Secret Service and sci-fi authors who are thinly veiled analogs of real-world authors, including Niven and Pournelle themselves. The best and the brightest were able to probe the Fithp's motives and limits to come up with several plans to fight back, which climaxes in the titular Footfall, an asteroid dropped into the Indian Ocean. The devastation was incredible. It neutralized every force except for a couple of small rag-tag bands in the United States and U.S.S.R.

The Fithp had the upper hand but a herd mentality is difficult to shake off. On the Fithp homeworld, there was a technologically superior race that died out, leaving the Fithp all of their scientific knowledge. The knowledge that a band of exiled Fithp planned to use against the people of Earth. The Fithp, being herd creatures do not engage in battles to the death, they surrender if overwhelmed. They do not understand why humans continued to fight back. More importantly they, like the authors, do not understand how humans would suddenly band together against a common enemy and say, "F--- it, let's kill 'em all."

The story itself is a 2-star yarn. Where it shines is in the diversity of characters and the incredible feats of realistic science, all of which become apparent in the end. The last 100 or so pages of the book are pure awesomeness. I won't spoil it for you.

But let me tell you about the hurdles that the final 100 pages had to overcome to drag this book from 2 stars to five. First, back in '85, the United States and the Soviet Union were super clear white hats and black hats. The Soviet characters actually age well, becoming more heroic than the author intended. They have a female cosmonaut, a handicapped astronaut and insisted on having a Keyan delegation member onboard the space station to meet the Fithp. They are smart, wise, and cunning. The Soviet cosmonauts come across as absolutely ruthless adversaries to the Fithp, as if the authors believed the reader would suddenly feel compassion for murderous aliens. They almost read as noble determinators.

Illyana, the deputy officer on the Soviet space station highlights the second problem with the story, whacky scrabbled-egg misogyny engaged in by the authors and all of the male characters. Every woman in the novel as a vehicle for sexual use or a strange depreciation. Oddly, the story can't happen without these characters as they seem to be the prime movers for every plot point. It is the strange case of "Livia was a whore AND she did it".

In case you don't get that reference, Livia was the wife of Caesar Augustus. In Roman history, women were tagged as either saintly women or as evil stepmothers. Livia strangely had both attributes as she wisely advised her husband until his death, but might have also murdered him for her son's benefit. There are T-shirts that read "Livia did it." The women in this book, despite being the prime movers of the story are not treated as kindly the Augusta.

The degradation doesn't stop with the writing, in the Audible version all but two women are portrayed with a whining tone at all times, which makes it difficult to distinguish them. Only two (maybe, three) women don't have this attribute or characterization and are better for it, but they have little to do with the major plot points.

I hate to say it, but the authors were confused about what the characters did and their importance. With a cast of 100, cutting off 50 female characters at the knees doesn't help with the confusion.

How can a book like this jump from 2 stars to five? The human response to the aliens and their ruthless methods of destruction and subjection of the threat. Earth fights back. And hard. This is no snub fighters against the Deathstar. It ends in a curb-stomping battle of diamond-hard science.

The Fithp have lasers and relativistic kinetic weapons. The humans have better. Gamma-ray laser and 2000 lbs. nuclear shells. And I haven't even told you the best part. I won't spoil it for you, read it yourself. All I can say is after I read the last quarter of the book I reread it. Then I switched to the Audible version because I couldn't believe what I heard. The Narrator who had been suffering through the first three-quarters of the book positively shone in the last quarter. It was amazing.

Footfall may be available on AbeBooks.com. This affiliate link will take you to the appropriate AbeBooks search page. Books are sorted by title and lowest price. I find that AbeBooks is a great source for old paperbacks and hard-to-find books at a good price.
Posted by Phil Viverito at 1/08/2022 11:16:00 PM No comments: