I didn't mean to start collecting comics when I was a kid. I always had this or that lying around but until the mid-80s, I read them rather than collect them.

Then I found this one: 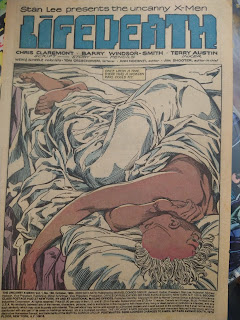 As you can see, I read it until the cover fell off. It was a fantastic story of loss and grief. I was all about the X-Men. I had tons of them plus every tangential story. And when Marvel started to add Wolverine to every title, I had those two.

But I actually read them.

In 1999, I got a job at Mattel. This is where I met the rabid collectors of crap. Barbie, Hot Wheels, Matchbox cars. People were nuts. I knew more than ever, that I didn't want to collect something for the sake of simply having it.

When my kids were born, I knew that I wanted them to read and comics were a great place to start. Giving a toddler a comic probably isn't a great idea so I waited a bit longer. The X-Men films were also not child appropriate, so more waiting. But in 2014, I took the family to see Guardians of the Galaxy.

My wife hates superhero movies, but she sat through any number of them for the kids. "This is their Star Wars," she said.

Funny true story: Just the other day, my daughter and I were talking about Thor: Ragnorok.

Kitty: Are we going to start watching the show? I don't really like superhero movies.
Me: What do you mean? You said, "I really like Thor: Ragnarok."
Kitty: Oh... I thought you said "Fraggle Rock".
Catherine: Thank God! I thought I was going crazy.

Now it's just me and the kids going to the movies. 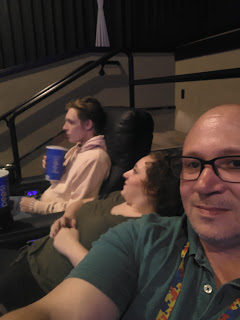 But it all started with comics.

This weekend we had a little flooding in the basement which forced me to again rescue what I have left. As I found this or that in the piles, I ran them upstairs for the kids to read.

You'll notice that my son Paul is absent from the picture. He is away right now, on deployment to god knows where. As much as I miss him on this Memorial Day, I know that he will be home in a few weeks thanks to the efforts of those who did not come home at all. I believe that because so many gave all they had so that the rest of us could have a better world.

And will we take some time to enjoy a comic or a movie together and it will be Good Times again.