Fleshing out the Lilac Queen

For my new campaign, I need to flesh out one of the antagonists. This is the first iteration of what I have planned for the party. I expect to give her more details as I get ready for the game. 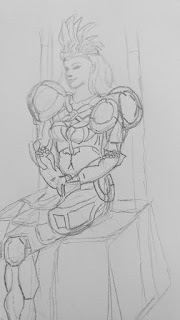 The Lilac Queen exists because of her desire to dominate her surroundings with positive order using technology, long lost. The Lilac Queen passed from a human state to a non-human, undying existence through intervention of her ship's repair functions. She retains these abilities via the spacecraft's ability to produce more nanites and repair droids. The Lilac Queen can be found in the command chair of the vault like control space of her ruined spacecraft when holding court.

The hull of the ship is entirely fused with the local rock, which is now silver and purple colored. This material has been harvested by the ship's repair features to encase it's queen in armor equivalent to +2 plate. She can only be struck by magical or silvered weapons or creatures with more than 11 HD. Silvered weapons do not need to be otherwise magical. It is a limitation of the technology. The Lilac Queen has the maximum hit points due to the ship's abilities to rejuvenate and repair her.

She was the pilot of the spacecraft. She is lightning fast and can strike twice per round for 1d6 points of damage. Each swing is equivalent to a +3 weapon. She also has the ability to heal two targets per round for 1d6 hit points instead of striking. The sight of her causes all creatures under 5 HD to be calmed and blessed. Calmed creatures will not attack her. She is able to use her technological talents to replicate some spells with the ability equal to an 18th level caster.

She is immune to heal, sleep, charm, polymorph, cold, heat, and death magic. The Lilac Queen will regenerate 2 hp per round inside her spacecraft.

She has a devastating polymorphic attack, which is only useable inside her craft. She can polymorph the bones of a creature into a trellis-like structure then the soft tissues are transformed into a lilac. This terrifying state prevents the victim from being raised or reincarnated as they aren't dead.

She derives her name from the name of the ship. The true name of the woman who is called Lilac Queen is unknown and there is a legend that if it is spoken to her, she will grant one wish before dying.

As mentioned before, The Lilac Queen has the ability to heal and deal damage, while regenerating at 2 hp per round. She also has the ability to "cast" a magic spell per round. The Queen is a gestalt being, fused with her ship which possesses vast predictive abilities and is as intelligent as the undying woman.

Her "magical effects" originates from a cloud of nanites surrounding her. The cloud has a radius of 300 feet and spells can strike anyone within this field from any direction. Although she cannot sense magic or read minds, if someone is inside this radius she can see and feel what they are doing at all times. She cannot be ambushed, surprised or backstabbed. She is unaware of the ability to turn invisible as she can see the invisible by their displacement of the cloud of nanites. Without a gem of trueseeing, the cloud is invisible.

Inside the ship, the Lilac Queen can replace two physical attacks with two spells per round. The source of one spell is the woman and the source of the second is the ship. Outside of the ship, The Queen can only replace one melee attack with a spell.

The Lilac Queen's ability to heal has been used to heal a great number of creatures she has encountered. When in combat outside the ship, there is a chance that one or more of these creatures will come to her aid. Roll on the following table:

The Lilac Queen does not use traditional magic, the source of these powers are the ship's systems. The nanites can follow her for up to 100 miles to provide "magical" support. They can recreate the following spells:

She can "cast" Light, Detect Invisible and Locate Object at will with no restrictions on the number of times per day. This is a function the nanite cloud.

Additionally, with study of the symptoms of a victim, she can recreate the effects any cure or heal spell useable by a cleric. She can cure disease and blindness. This study takes one hour. She possesses the ability to do the reverse of each of these spells but chooses not to do so. She can raise dead, but rarely sees the need to do so. These are natural abilities and have no limitation on the number of uses per day.

When encountered, The Lilac Queen will appear distant and aloof. She has a tendency of not looking at people because of the data provided by the ship's systems and the cloud of nanites surrounding her.

When she holds court, she will make eye contact. It is disquieting as it obvious. The typical purpose for holding court is to give or receive information. Many creatures come to her for healing, which is the third purpose for her to hold court. If someone has a request to make of her, she collects information via her cloud. This uses her clairaudience and clairvoyance spells. As a result, she gives the impression that she is all knowing, but she is not.

The Queen is a fearsome woman. She never displays emotions not does she give the impression that she might attack. She does not issue threats, only promises. She may indicate that an attack is imminent before resorting to it. She is very logical.

If she is drawn into combat, she will only attack people who attempted to attack her or the ship. Being logical, she will attempt to combine "magical" attacks to end the combat as quickly as possible. For example, she may bury people with Move Earth or use Stone to Mud to immobilize and drown targets. The ship's robots will be used to herd targets into one area so a single spell can be used on all aggressors.

If she or the ship kills a character, there will be no effort made to remove or otherwise dispose of the body. She and her robots will ignore it. They will also ignore anyone attempting to remove the body as it is an illogical disruption to the natural decay process and a waste of energy.

It should be noted that she can use her ability to raise dead to restore friendly dead creatures in her defence. Some of these creatures have been dead for centuries. Many of these people and creatures have few combat skills and will immediately flee in horror, but some will aid her in combat. Over the centuries, she has considered raising each and every one of these beings, but until she has a need, she will not. Point being, every creature killed in the ship will be studied as per the restrictions on her healing and raise dead powers so there will be zero hesitation or delay in bring them "back online".

Non-player characters who are aware of her abilities will not be willing to attack unless otherwise specified. No character can command a hireling or follower to attack her without attacking her first. They will be unwilling without encouragement by example.