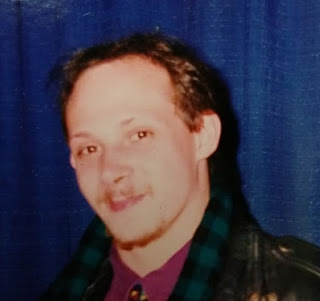 In June, I typed up a character class for a Unicorn. It worked very well for this off-kilter game session. The other three characters are a Druid, a Gangbanger, and a (Space) Marine.
Today, I would like to work on the Gangbanger character class. First, I think gangbanger should be a title of the class, so the class name will be Hoodlum. At first, I thought hoodlums would be a fighting man or thief, but after some consideration, I believe they are more like clerics than anything. They have a clan, family and they have friends that believe the same thing they do. So, they are reskinned clerics.
Hoodlums are anachronistic to the fantasy setting, being people from the 20th century. Skaters, punks and gang members. That being said, they can't use heavy blade weapons just like clerics. They will use knives and daggers plus blunt weapons. Oh, how a good baseball bat can feel. They use slingshots over bows and regular slings, knives over darts but can use a crossbow.
They don't use shields and generally will not dress like normal fantasy characters, so AC is difficult. The Gamma World conversion rules are a nice option, but I think I will stick to just 3 types of armor.
A leather motorcycle jacket will count as AC 8. Adding helmets and padded will get them to AC 7. Also, they can modify any type of armor found in a fantasy setting to get to AC 6. This is the lower limit for them, as they are wearing real armor in a fantastic way, it's more for looks than function. It really doesn't matter that they pull parts off of full plate, they are wearing it wrong and can't improve their AC score below 6. Creating their own signature armor is level dependent, which grants improvements at 1st, 3th and 6th levels.
Hoodlums have the ability to pick pockets, sneak and hide, so in respects to those three talents, they operate like thieves of like level. They do not climb, detect or disarm traps as thieves. These skills aren't in their field of practice. Plus booby traps are for losers.
Their next ability is improvised healing. Once per day per person, they can heal 1-3 hit points. It takes an hour. This ability comes from their desire to avoid hospitals and police involvement. Normally, they patch themselves up with items on hand, such as Mr. Clean, vodka and scraps of fabric, but it also works on others. It hurts.

Hoodlums can use any magic item without a class restriction, they may not use magical weapons, shields or armor that they can normally can't wield.
Their last ability is very powerful - technological adaption. Their ability to use crossbows, sling shots and create custom armor are minor variants of this skill. The ability to use horses and scrolls is a major expression of this skill.
Hoodlums are current on all technologies to support their criminal activities. They will seek out a horse by 3rd level and will gain ability to fight from horseback at that level. This is not a magical animal like the paladin's warhorse but just as treasured. At 5th level, they will be competent with driving and maintaining wagons and carts. At 7th level, they can ride war chariots. Much of their money will be directed into pimping out these vehicles and conveyances.
Hoodlums see scrolls as codes and secrets to be deciphered. This is a two step process. They must study a spell for one hour to see if they understand it, which they have a 50-50 chance at first level. Success means they understand the spell enough to try it in combat later, which also requires a roll with the same chance of success. For every level of experience, their odds improve by 3% to a maximum of 80% at 11th level. This is a once per day skill. They can only work on one scroll, one spell at a time. The level of the spell in irrelevant. Hoodlums will not be able to activate a scroll which would cause a loss in ability points (wish and the like). They know this and will not try.
If they decipher a scroll with hostile magic (a curse or explosive runes) they will set it off.
In combat, reading a scroll takes one whole round. Failure during combat indicates they get tongue tied and can't activate it. They may not make a second attempt until the next day when they can take an hour to study it again (and possibly fail).
For the purposes of the hoodlum class, each and every spell and scroll combination is unique due to the handcrafting of the scroll. Deciphering a spell on one scroll does not confer the ability to read that spell on a different scroll, unlike clerics and magic users who use a different methodology to practice magic.

It is interesting to note that this skill is more akin to code breaking than spell casting. They do not have the ability to read magical text in any meaningful way. Clerics and magic users will be confounded by the hoodlum's attempts and will understand how risky this talent is.
The Hoodlum receives 1d6 hp per level plus Constitution bonuses. They fight and make saves as clerics and have limited armor and weaponry. They are always human to start the campaign as they are dimensional travelers, but once a gang is established in your campaign, they could be of any race.
I'll update once I create a pretty table like the one I used in my Unicorn post.