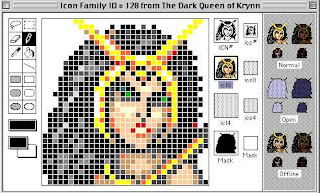 Welcome to These Old Games, 1992 edition. The Dark Queen of Krynn was a part of SSI's Gold Box series of D&D games. It happens to be my personal favorite.

This was part 2 of a three part sequence. You could (and should) bring your characters over from Death Knights of Krynn. Back in the day, I was buying these games singly, and I had no idea Death Knights of Krynn existed because it wasn't on CompUSA's shelf that week. Actually, Death Knights would not appear for 2 more years on Macs.
I am not sure where I'm going with this post, as this is neither review nor walk-thru. Perhasp it is a retrospective. 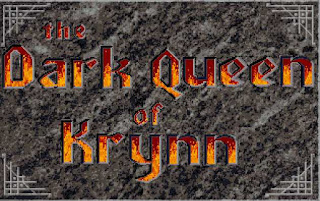 When you drop into the game, you are presented with a blank screen, where all of the action begins. Once you have some characters, either through import or generation, you can begin. 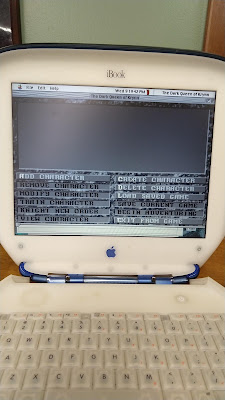 What I loved about this game was it's faithful rendition of D&D. You had class and racial restrictions, which were locked to "hard mode". There was no bypassing these. This game was the first to enforce spell limits for Wisdom and Intelligence. Typically, you'd discover this when a character looses a point on a Stat after a certain point.
Also, the rule booklet doesn't explain that Elves can't be raised and "our elves are different", so they can and do sleep and are subject to sleep spells. So... considered yourself warned. The kinder's have an unusual ability, they can backstab with a blunt weapon which is helpful in more than a few circumstances.

There were also some bugs which could wipe you out. Save often is the golden rule.
The first bug is that characters eligible for level up would be highlighted in a nasty pink color. Sometimes, the game would bug and not highlight your character. You could go on forever thinking a character had not leveled. This isn't a major bug because if you hit the train command, that character could train. You just had to watch the experience points to know you could.
The reason I mention this bug first is, there are a bunch of cheat codes for this game. In the DOS versions, you have to do some junk to access them, but on a Mac they were ready to go out of the box. Pressing a certain key combination would bump your character up to the next level. This could make the game unplayable, or at least unrewarding. (I think it was alt-J or ⌘-J). This cheat will completely ruin the game. The ⌘-J cheat could age your characters into losing INT or WIS, so be careful.
The next bug is frustrating. There is a "quick mode" which would have the AI take control of your character(s). First, the AI is pretty stupid and second, it is faster than you. Once quick mode was in effect, hitting the space bar fast enough to stop it was nearly impossible. One trick to get out of it was to remember the character order and slam the space bar before the next character's turn. Frustrating.
A third bug was the possibility that the game would teleport the party to a room with no exits. Reboot was the only way out as this bypassed the save game menu. You loose progress, but at least you can recover.
A fourth bug was basically the opposite of the third bug. A monster would generate in a room with no exits. In this case, you couldn't end the battle. You could select flee. You didn't gain treasure or experience, but at least your game could continue without a reboot.
The are several cheats that are almost necessary to play the game. The players are horribly short of magical arrows and this game power escalates fast. You need +2 arrows right from the start. Unfortunately, you can only buy magical arrows at one point and they are expensive. The other frustrating part of this game is coins are dead weight, slowing your character down and have relatively little value besides Identifying items. So, when you get to the point of being able to purchase magic arrows, you the game has trained you not to carry steel pieces.
There are two variants of mugging a character for goods. One is in-game and one is out of game.
In game, you can create a bunch of characters which always generate with specific equipment. Typically, you'll use fighters who start with 40 +2 arrows. Create Bob, Ted, Jim and so on, add them to the party and transfer their gear to a character you intend to play with. Then remove them from the party and delete them. Instant infinity arrows. (Not really, you'd have to do this a lot.)
The second method is out of game and carries some risk. It is also labor intensive. In the save folder are some files. You'll see all of your characters appear with the ending .qch for Queen CHaracter. These are the files you want to mess with. 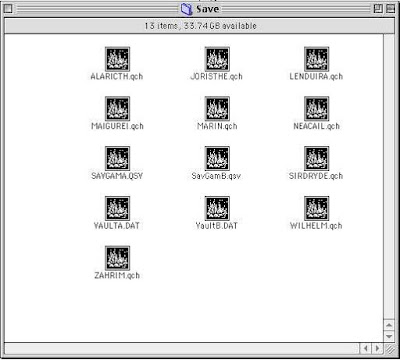 If a character is awarded a cool item save the game and quit. YOU MUST QUIT!
Hit the ⌘+D to duplicate the whole folder - Twice! Name one "working copy" and the other "backup". Don't touch "backup" unless something goes wrong. Open the game. Steal the item you want from your character. Save and quit. In the finder, duplicate that character in the "working copy" folder. Rename it to <your character's name.qch> and drop it into the Save folder. You'll get a warning that you are overwriting the file. That's ok.
When you reopen the game, now two characters will have that item. You can repeat as often as you like. In fact, if you reduplicate the folders, you can double the number of items you can steal each time. So one item converts to two on the first cycle, then you duplicate two items on the second cycle for a total of 4. On the third cycle, you have enough for a whole party. I would create a holder character, so I could dump extra good items to them. That was more labor intensive, but effective.
Back in the day, this was all done on floppies, so you had a slight chance of having a disk failure. Especially if you were using the free CompUSA disks or had hole punched a 400K so it read as 800K. Working on an actual hard drive is easier.
Since you are in this folder and you have access to huge hard drives, you can make a copy of your whole save folder in case something gets borked. The files labeled SavGam<letter>.QSV are all of your saved games. It's good to have a copy in case you get happy hands and overwrite one.
There are 2 files in this folder that I could never figure out. VaultA.DAT and VaultB.DAT. The game won't work without them and editing them with a hex editor doesn't work. They also touch your saves and characters, so you can fry your whole game by messing with them.
I am pretty sure I am not done with this game. Heck, I'm the guy who ran through 100 days of a pen and paper game by the hour, so no I am not done. Only for now.
Posted by Phil Viverito at 6/25/2020 12:47:00 AM No comments: