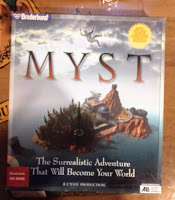 I lucked out in having a computer or two since 1980. I purchased a Timex Sinclair with the 8 k extended memory for the outrageous price of $126.00. It was so expensive at the time, I financed it and made 12 payments of $12.25.16.6% interest! Not bad for a kid financed entirely shoveling snow and mowing lawns. I needed mom's help. Every month I gave her $12.25 in cash and she wrote a check for me.

With everything going into the basic cost of the computer, I had to beg my parents to buy me software. A lot of times, I had to settle for going to the library for books on programing and a blank tape for storage. In 1981, the film War Games sparked my imagination as to what computers could be.

A little over a decade later, I discovered a game that embraced both limitations and imagination to amazing effect.

You're the protagonist in a story that isn't told but shown. The limits of the then modern day Macintosh allowed for spectacular images, but only just an image. One at a time. Plus a bit of sound. To do this, the Rand Brothers tweaked the hell out of their hardware and software, even stripping down the color palettes to capitalize on the Mac's meager specs. Better than everything else on the market but still limited to handful of hertz and less than a half dozen megs of RAM.

Gorgeous images told the story of a family shattered by envy, power and pride. Using the linking books, you search for the pages that will restore Sirrus, Achenar, and Atrus, whoever they might be. Catherine, the wife of Atrus and the mother of Achenar and Sirrus appears only via a note. You have no idea what is happening and what needs to be done. Your quest takes you to different worlds called "Ages" to recover the pages.

Each Age, named Selenitic, Stoneship, Mechanical, and Channelwood contains puzzles to be solved. The mechanic of the game required at least two puzzles, one to progress in the game and a second so you may return to Myst Island. Travel between Ages required a book written to describe that age. Open the book and see the Age. Touch the page and enter the Age. To return, you need to find the linking book hidden within the Age. Ingenious.

Pure and simple. Easy? Hell, no. 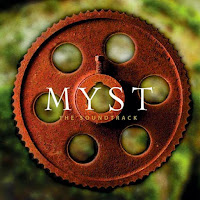 While the execution is simple, the hardware had just enough umph for a wonderful musical score plus tiny postage stamp size videos, which when they appeared were like magic. Puzzles were challenging but not insane or click-hell.

The requirements of the game also allowed for very creative storytelling. There is no clock, no death, no violence, and no enemies. Yet the nature of the game caused tension. This is the fusion of art and storytelling at it's finest.

This 28 year old game was the reason I started blogging. I wanted to make a fan site for this game. You'll notice there are no stars assigned to this review. How could I assign stars to something that provoked 10 plus years of work, hundreds of posts exploring the nature of play and entertainment?

As a corollary to this review, gave my oldest son Paul a set of hardcover Myst novel. As former library books, they were cheap. But my son claimed that made them more special.
"These books have passed through many hands. They were loved my many people and loved by me." He was 10 and that was more eloquent that I could be. And it was true. 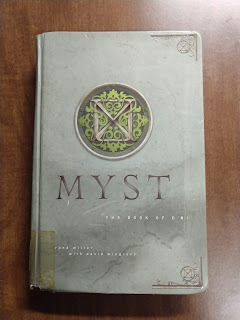 For his 11th birthday, he asked for Amazon gift cards.
"I want some books. I need books."
So, his grandparents, aunt and godmother, and my wife and I gave him Amazon gift cards. And he got the books he loved so much.
He ordered a complete set of Myst soft covered books. When I questioned this purchase he explained, "The little books are Linking Books. You need them both to succeed."
To say that this one game has shaped many parts of my life would be an understatement.
The world of Myst has expanded greatly, but these links are a start if you are interested.
Posted by Phil Viverito at 4/20/2021 10:16:00 PM 1 comment: