Session 1 - A Very Bad Day at the Beach

I have the party all set. There are eight 4th level characters. The quick details are: 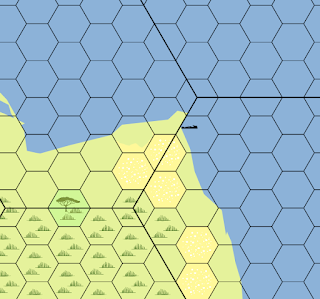 Their goal is to land on the beach of the island and move south, tracing the shoreline. They are looking for furred animals, freshwater sources, and any trails or paths that hint at the location of the shrine of Terminus. Their ship, the Zephyr will check in on them from time to time. The captain of the ship has found a nice place to put the explorers down, a rock shelf with very shallow water. Due to the wind and currents, the captain has to put the starboard side of the ship closest to land.

The party briefly explored the beach while a group of 4 sailors brought their gear to shore using a large rowboat. Two of the sailors were left on the shore to watch the gear while everyone else waded out to the ship to help with the mules and horses.

The ship used a sling to lower 4 mules down to the water. It took two people to settle the mules and get them wading ashore. Gerwinder and Rolf awaited the first horse, Ezekiel the warhorse to be lowered to the water.

At that moment, the crew on the deck sees a surge of water coming towards them. There are sea serpents bearing down on the party in the water. 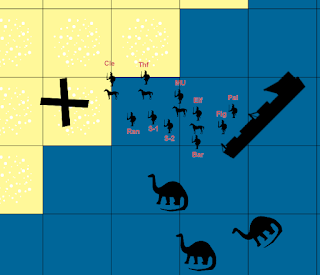 Since no one is surprised due to the range, the captain bellows orders to raise the anchor and drop the oars in the water. Bedlam ensues because of the men in the water near the ship, the horses on the deck and the sling is still in the way of the oars. Only the port-side rowers get into the water. The ship is backward with the port side facing out to sea.
The party loses the first round of initiative. The first sea serpent lashes out at the third mule but accidentally bites a sailor between it and the mule. Satiated, it turns away as the party is knocked to and fro. The first two mules make for the beach taking Garvin the Cleric and Bartholomew the Theif with them. Masha is pushed away by surge while the fourth mule and Elf use the same push to move away from the beasts.
The Ranger, Fighter, Paladin, and Bard splash forward to meet the second sea monster with swords. Everyone else tries to get out of the water with the mules. 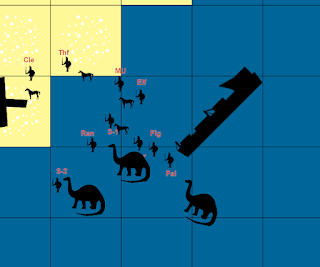 The party loses initiative again and the sea serpent tries to devour the mule. The mule takes 4 points of damage and cannot land a hit. Only Rolf and Alex are in range to strike and manage to roll a 20 and 19, doing a total of 11 points of damage. 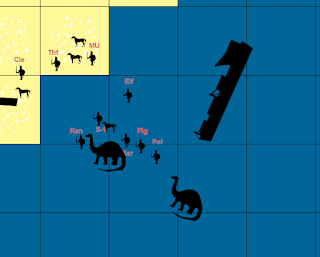 The Serpent is hell-bent on taking the mule and stays in place giving Gerwinder and William time to close. It mistakes the sailor as an attacker and bites him. Onboard the ship, the captain gets the crew moving and the ship rows backward and sideways a bit.

The mule thrashes away while the serpent finishes off the sailor. The Bard and Ranger miss, while the Paladin hits with another 20 for 7 more points of damage. Rolf barely manages to hit but rolls enough damage to kill the sea serpent. The first serpent has disappeared in the distance while the third is confused by the thrashing oars and combat. 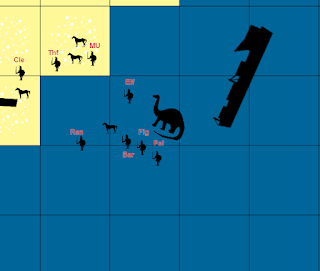 The last sea serpent rushes behind the party and they manage to wack it a few times. 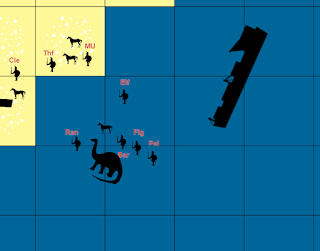 The sea serpent manages to grab the mule but takes a series of fatal blows for its effort.
The tired party stumbles ashore. While not mentioned in the above notes, the party has taken minor damage from being battered by the surf. They don't have a lot of good options as the ship has pulled back away from the shelf. The first sea serpent is circling the corpses in the water. No one wants to wander out there and the ship doesn't have any weaponry. The crew does have slings and bows, but the crew is not confident in their own abilities considering the serpent could attack the ship and sink it. The bard and ranger have taken a couple of potshots with arrows, but it's ineffective.
The captain and the explorers have a frustrating shouting conversation across the water. The explorers will take the two sailors with them south. They will leave the horses on the ship. The party takes stock of its resources and realizes how lucky they were. No one was wearing armor in that fight.
They have their supplies, three mules, and two extra sailors in tow. The mules were meant to carry two large tents, water, and food, plus some equipment like lanterns, oil, firewood, and a handful of spears. Additionally, they have 8 saddles, 8 saddlebags full of supplies, and a rowboat. It's beginning to look like they have too much stuff.
They decide to set a watch for the afternoon and set up one 8 man tent for the night. Since there are two extra members of the party, setting watches is easy and the night passes uneventfully.

By morning, things are looking better. Bartholomew, Alex, and the two sailors have cobbed together a 3 or 4 man tent out of horse blankets, a pair of reasonably serviceable backpacks from some saddlebags, and hatched a plan to cache the saddles and extra supplies with one of the two 8 man tents.
Two serpents are circling in the sea. Maybe more because the corpses are all gone. The ship nowhere to be seen.
Also on the downside, someone has named all of the mules Barth-a-mule. The Bard pointed at the Paladin and she muttered an ungodly oath that it wasn't her. She also roundly curses her armor and the lack of a horse. These are real problems, she can't walk fast in plate armor and they have far too much gear for 10 men and 3 mules to carry easily.
The Cleric, Theif, and Bard urge the party to stay in place one more day and night while they try to get a handle on all of the gear they have to transport.
Posted by Phil Viverito at 2/06/2022 12:46:00 PM No comments: