For the past year I've been saying to myself, "Update my Swashbuckler Character Class" on DriveThruRPG. I'm working on that now. I have some refinements for that class, but I also want to convert this offering into a pack of wacky character classes. You've seen The Monomach, The Unicorn and The Hoodlum class here on These Old Games. I've playtested these characters plus two others The Veteran and The Space Marine. The Veteran is a 1970's era soldier, while The Space Marine is a technological character.

The Hoodlum, Space Marine, and Veteran all have the exact same issue. They have firearms that are wildly different than anything else in B/X or AD&D. The original DMG features guns, but the rules are wildly unbalanced and totally wrong for budding or growing characters. They also presuppose ownership of Boot Hill and a familiarity with those rules.

They are rightly killing machines, but a good character that does not make. For B/X and its "I go, you go" style of combat, one shot per combat round is for the most part fine. For AD&D where some characters get multiple attacks, guns get crazy.

One way to address this is to control what the gun does.

Of course, it should do damage. For B/X that's a flat 1d6. If you use variable damage or AD&D, then they do damage based on the weapon type. 1d6 for pistols and shotguns, and then 2d4 for rifles. I don't see a need to adjust anything for a laser pistol or rifle over a slugthrower. That's not much better than the melee weapons offered in each game and it shouldn't be better.

When used as a pointy or blunt weapon, rifles and shotguns should do 1d6 points of damage, and pistol whip should be like a punch with a +1 for having a chunk of steel in your hands. We are still right in line with standard melee weapons, except for the pistol which is about as useful as a brick in melee.

What I need to weigh is the fact that a select class of characters can fire more often than someone can swing a weapon. I would link that to level. A first-level character is going to be more cautious about throwing away ammo when they can't get ammo. At higher levels, they will be freer with bullets because they have grown into someone who gained other skills.

Tracking ammo is a beast so it really shouldn't be done. A soldier might be carrying up to 20 pounds of bullets, maybe more or less. That's like 150-300 shots. With prudence, a character should be able to wipe out a 75-150 Hit Dice worth of critters. That should land them in Class Title territory.

To address ammo constraints, I would use the rule that if the player rolls a 1 they need to reload before they can shoot again.

I would also provide a morale bonus to the player with the gun. The noise and fire may drive off monsters and men. I would impose a normal morale check the first time a gun is fired. This would occur for every combatant that has not seen a gun before, including friendlies. They might just want out. Other morale checks come at the normal triggers, the first casualty then 1/2 of the force being lost. These should be done at a -1 and -2 respectively. They are going to bug out faster in the face of gunfire. This is an interesting dynamic because it robs the players of loot in some cases.

Now, some people and creatures are not subject to this adjustment or even the first fire morale check. True fighters would be nonplussed by gunfire. Dragons and snakes, too. They are wary, but not threatened any more than any other type of attack.

Magic-users would need to make a saving throw vs petrification to continue casting with someone blasting around with a gun near them. They startle and need to control that reaction. If the spell was foiled by gunfire, the magic users don't lose it they just need to start over.

What advantage does a gun give? They aren't better than melee weapons, but they do have some effect by forcing morale and shock. By removing the capabilities of a firearm from the device itself and moving those abilities to the character, you get a nice even approach.

Check back for some of my next moves to get these characters published. 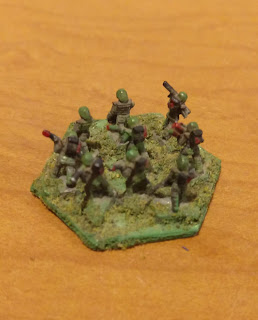