I have my new boxed sets of Old School Essentials. Right now I am sticking to the Basic set and generated several characters. In no particular order, they are 2 Clerics, a Thief, a Dwarf, an Elf, a Magic User, a Fighter, and a Halfling. My intent is to roll as many dice as possible, covering as many scenarios as my players want to do. So, one of every character type in a freeform environment.
I took inspiration from a photo I took in Disney's Epcot. I have this weird mental association between amusement parks and D&D.

This was taken in the United Kingdom pavilion, I think. This is close to what the characters are experiencing. 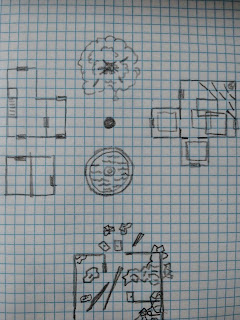 Since only the Thief and the Dwarf know what actually happened, the rest of the party is mystified by the fire and blood spatter caused by horses.
They forget about the bell on the door and there is another die rolled for wandering monsters. Nothing answers that dinner bell.
They post a watch downstairs and take the Thief upstairs to a bedroom to sleep it off. I have some of my house rules for healing in Zero to Hero: Uncommon Commoners, if you are interested. They are useful and timely in this case as the Clerics can't cast spells but can perform first aid or use healing skills. I have a priority of healing: aid (1 hp), then doctor or healer's care (a die roll), then rest (as per whatever rules) and finally magical healing. No one can render first aid or skill-based care after magic has been cast, but the reverse is NOT true. It annoys healers to no end when Clerics cast magic first and then drag someone to a healer. It forces a healer to use only magical means. Magic is a consumer product in my world; it has consequences for society.
By sunrise, the Thief comes to with 3 hp. She wants to thank the Dwarf for rescuing her. There is a sheepish look from the party as they realize they didn't do a headcount after their retreat to the general store. In splitting the party between upstairs and down, they had no idea he was missing.
By the fountain, they find a warhammer and a boot. In saving the Theif, a second catfish hit the Dwarf. He had 9 hp and the first bite did 15 points of damage. Then came the 4 feeler attacks. -10 was not enough HP. The second catfish pulled his body into their lair.
I could calculate XP, but the party doesn't even know if they found anything or killed a monster... yet.
I think I'll end it here. Next post, I will talk about the Temple and the Missing Tools from the general store.
Posted by Phil Viverito at 12/03/2022 08:23:00 PM