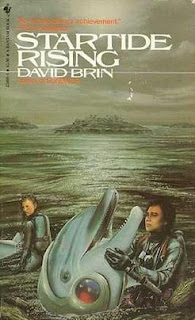 Startide Rising was the book that introduced me to the series. Being that this novel is not expressly linked to the first one left me confused as to where this series was going.

Anyway, Brin starts this book in the middle of a mess. The Earth ship Streaker was running for 10 different kinds of trouble. Crewed by 150 dolphins, seven humans, a savvy and wise AI and a socially awkward chimpanzee, the Streaker's mission was to research data provided by The Library, an alien font of all known knowledge.

The Library is an interesting piece of technology sold to Earth Clan. It was advertised as a completely unbiased cache of all information known to the citizens of the Five Galaxies. Brin's use of this device to drive the plot was excellent. The machine is persnickety, offering a deluge of information not really pertinent to anyone's needs. Its reactions to who asks the questions and how came across as maddening.

It doesn't take long for humanity to grok that the Library was a great booby prize that came at a greater cost. Captain Creideiki's mission was to pick away at the cache's information and find flaws. He immediately scores a win for humanity with the discovery of The Shallow Cluster, the resting place of thousands of ancient alien ships, many of which have mummified crews. During the course of the mission, the Streaker suffers its first loss when the Captain's Gig was destroyed in an accident, claiming the lives of many brave fins.

Even in their loss, the crew make wonderous discoveries and transmits their discoveries to Earth. The answer was as timely as unexpected:

“Go into hiding. Await orders. Do not reply.”

Soon the Streaker and her crew are fighting for their lives. Thennanin, Soro, Brothers of the Night, Tandu and dozens of other fleets of battleships engage the tiny Streaker. Creideiki orders the Streaker to a distant, fallow system named Kithrup to hide and make repairs. Kithrup, a water world offers mobility and safety for the dolphin crew while exposing them to the danger of metal-rich poisons. Their refuge was also a death trap.

As the fleets hammer away at each other over a period of a month, the crew succumbs to primal urges and fractures. The array of responses are both typical, fight or flee and unusually, devolve to presentience or mutiny. The humans and the Captain struggled to keep everyone in line as they hatch a plan to escape.

Under a sky of enemy ships, the Streaker made repairs and ploys to allow them safe passage from the system. As if the original discovery wasn't enough, the Streaker's crew unlocks several mysteries of Kithrup's past. As the battle rages around them, the crew bravely draws their opponents to the surface before making a heroic attempt at escape.

Startide Rising is a strong second novel in the series, one of the strongest follow-up works I have ever seen. Brin does world-building on an epic scale while amplifying the sense of frustration and isolation of the claustrophobic Streaker.

This was one of my favorite novels when I was younger. I'd love to say that this one was my favorite of the Trilogy, but the next novel in the series is my hands-down favorite. Both are excellent reads, hence the tied score of 5 of 5 stars.

Again, your best place to find this title is a local used book store, but if you can't find it there, I suggest AbeBooks. Click this link to search for Startide Rising on AbeBooks. Results are sorted from lowest price to highest.