Back in September of 2021, I wrote about the sarcina as an alternative to a backpack. It's a stick carried over the shoulder by a Roman legionary. The sarcina came into its own around 107 BC, when the statesman Gaius Marius pushed for a professional paid army for the Republic. And it's been around ever since.

Marius's goal was to eliminate the dependency of the army on a baggage train. To this end, all carts, and wagons were eschewed except when absolutely necessary. The average Roman soldier didn't travel by horse, they walked and carried everything they needed on their backs. While the Marian Reforms meant to eliminate the baggage train, it did not eliminate horses and sometimes the troops used donkeys or mules for support.

Being that every rule has an exception, there was the Legio X Equestris, or 10th Mounted Legion which did travel by horse. In a strange case of history rhyming without repeating, there exists the 10th Mountain Division. Based out of New York, the 10th specializes in mountain warfare and makes limited use of vehicles and equipment like artillery. Being specialized in moving troops and equipment without support places the 10th at the forefront of humanitarian deployments.

While I'm revisiting the sarcina, I want to compare what a Roman soldier would carry to what a D&D character would have. 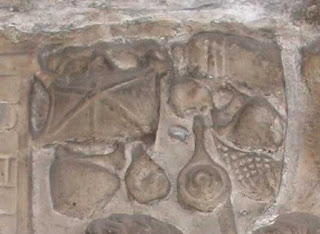 A soldier would have his sandal-like boots, leg wraps, a tunic, a cloak, a scarf, lorica type armor, a gladius or short sword, a dagger, a shield, and a bag to carry it, a helmet, and possibly some darts or pilums or caltrops, plus his sarcina. For some reason, when it came to darts, pilums, wolves, and caltrops, they were carried in threes.

From that list, we can remove all of the clothing which is normal and customary. That leaves the following list (with weights) for soldiers in combat:

D&D seems to get these weights correct most of the time. No one thing would have a standard weight as they would scale to the wearer. A lorica is typically 11 kg or 22 lbs, which almost matches the list. So a Roman soldier would be carrying about 37 or so pounds in a combat setting. Where D&D slides is in the armor types slowing the base rate of movement down. The Romans ability to move and to maneuver was pretty much the gold standard in antiquity until they met eastern forces like the Huns and Seleucids. Armor wasn't much of a factor in speed of movement.

But this essay is about the carrying capacity of a sarcina. So what is in one? A lot:

Some of these items have an unclear weight or mass. A basket would have been wicker and those weigh next to nothing. Toiletries and personal effects were probably less than 50 cns or 5 lbs all combined.  It's attested that those with too many toiletries or personal effects were roundly mocked by hardcore soldiers. Before Marius, some soldiers had a slave (or if you prefer, a worker with a job and no pay) in tow just to rub, perfume and oil a soldier before and after combat.

The iron rations were a lamentable and dubious item. Bucellatum, as the Romans called it was hardly edible. Losing a tooth to the biscuit was a common war wound. Soldiers were actually called bucellarii or "biscuit eaters". Let's call it 2 lbs. or 20 cns.

There are a couple of standout items on that list. The bags were made of leather or hide and heavy. They provided some structure to the sarcina so they were also necessary.

All told, without the mysterious items without weights, the average Legionary was packing 50 lbs or 500 cns in the sarcina plus the 37 pounds of weapons and armor. Surprisingly, that is in the realm of what modern soldier carries on a good to a great day.

What is interesting about that list is what is missing. The Romans had a great road system with mile markers. They also knew the lay of their own land. This meant that they didn't remotely carry as much water as a modern soldier. So long as they weren't going the wrong direction, they knew where the next stream, spring or well was. In foreign lands, they would have scouts looking for such things.

The other thing that is missing from the list is a tent. The Romans had 8 or 10 man tents called a contubernium. There is no way for a man to carry one. Basically, they would set up camp with what they had and if necessary move the tents to the camp later.

That sounds pretty poor, but if you think about what the sarcina is, it provides a solution. It's a pole with 3 different bags, a tunic, and a cloak. Two of them put together could be cobbled into a makeshift tent using the cloaks, shields, and bags. A Roman shield at its smallest is 2 feet by 3 feet and could be as big as 3 by 4 feet. The bag is bigger than that so the shield fits. While I wouldn't want to sleep in the snow with such a ramshackle tent, it's doable in three seasons.

Now looking at a typical D&D character, they should be carrying just as much as a Roman soldier, but in a backpack. And judging by my players, they often don't carry that much by half. The players never think to bring a pickaxe, a turf cutter, a shield bag, or any of the other stuff a real person would need. Some of them think a 10-foot pole is ungainly.

What I find amusing is, a lump of 1600 cns worth of gold is only about the size of a couple of two-liter bottles of pop. "Soda", to you demi-humans. That would totally fit in a backpack, but your spine would scream. This is another case of needing some other method to move something. Neither a sarcina nor backpack would help much in moving that much coin.

This isn't to drag down the idea of coins to pounds for encumbrance, it actually proves the system works. And reasonably well. The flaw is in the idea that treasures would be limited to gold coins. I think everyone has had that campaign where the party ignores copper pieces because they aren't worth enough to pick up.

The other thing is the dubious nature of iron rations.

But those are essays for another day.