We are in week three. The crew is on Nipna and is looking to make a profit. Emily proposes that they move to the colony where they can trade some goods. To further this goal, Emily orders the hoppers deployed, freeing up their 40 CU slots on the ship. Now the Zephyr can hold a ridiculous amount of products, so long as they don't move.

Over the week they spend a lot of time purchasing low and selling high. It isn't all that interesting. they take on some u-suits, fuel units, repair units and weapons. Emily decides to stock the ships weapons locker with two cases of side arms TL-6 and arm the crew appropriately. Every crew man has atleast a TL-6 side arm plus the Emily and the Gunners all have heavy side arms. They also take on 6 addition TL-6 heavy side arms for future use. Surprisingly, they make the most money off the fuel and repair units.

By the evening of day seven, they have made 2540 secs. Emily calls it and moves the ship back to the spaceport where they set down and redeploys the hoppers in order to take on more goods.

Emily is feeling kind of broke, so she personally invests in some repair units and then hopper guns. She manages to make herself 430 secs. Additionally, the crew arms up the hoppers with new TL-6 guns at a cost of 240 secs., which was slightly offset by selling the guns they had for 30 secs each. The rest of the crew takes a day of RRR and are impressed with her trade skills.

On day 9, things go wrong. Very wrong. It was decided the ship would depart on Day 10. The crew would pick the destination once they made orbit. Since day 9 was a day of RRR except for Emily, they accidentally rolled a contact. They got the dreaded e133 Death Squad again.

The Zephyr and one of the hoppers are damaged by two titanic explosions as the miner's connected and exploded.

And here is where the rules go batty. There are some references to explosive hits on a ship and boat, but these guys merely have to touch the ship to cause damage. But how much? I don't know. Since damage is determined by a to hit roll and they don't have to roll to touch something, what happens? 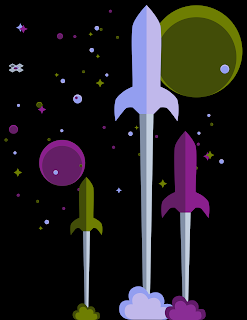 I can't imagine that someone could miss touching a starship or a boat. They are walking bombs so I decided that they do 1 point of damage to the Zephyr and 1d6 plus a critical to the hopper, just like a blast from ship's guns. The hopper takes 2 points and rolls for breakdown. It's a TL-1 hopper, it doesn't breakdown.

The next round is brutal. The hoppers open fire with their guns as the Zephyr leaps into the air. They down the spitters while the other two members of the squad mill about. The hoppers lift off and continue the carnage.

Three rounds of combat and the squad is dead. The crew seriously considers upgrading the Zephyr's guns.

Day 10 is spent as RRR with no results. They obviously get a visit from the local police, which doesn't really effect anything. The police are just happy to have the Death Squad dead and the Zephyr leaving the planet. The engineers patch up what they can before heading to bed. One hopper has a good sized hole in it (1 point of damage).

The crew will pick a new destination on day 1 of week 4.