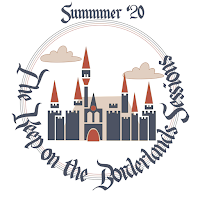 This map is very useful for something I put together in 2 minutes for our B2 Sessions. The Party controlled areas are in green, the Orcish side is still white like the original map and the areas that the party as seen are in orange.

The party rushed into area A, discovered the pit trap and retreated.

It certainly helps me keep everything straight. 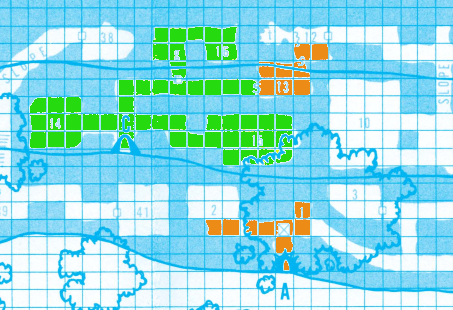 Our heroes are completely under siege. The combined orc tribes have been hitting them non-stop since they took the B caves from them.

Let's look at it from the orcish side. They have 27 male orcish warriors plus the two leaders. Some of the women have taken up arms to defend their home. I figured about half of them are available, which gives the orcs a total of 40 warriors and two leaders.

Initially, they caught the party in a pincer move by attacking both entrances. The secret door is no longer a secret. The two times this was attempted, the party was caught in room 16 and were able to foil attack with tricks and traps near the secret door.

From that point forward, the party left a deadfall trap in room 13, which made the orcs abandon it. The party used this area to launch a surprise attack on room 12. The orcs managed to dislodge them by attacking the mouth of the C cave. As a result, room 13 is now a no man's land,  heavily trapped with oil, pits and spikes.

The orcs have also tried to lure the dogs out to kill them but failed.

There have been a total of 10 attacks on the cave's mouth all of which have failed. The orcs have lost 12 warriors in all of the combined attacks. They keep losing with bad morale rolls more than actual deaths. The party is shooting them in the back, from hidden positions. They are saving those +1 arrows for the orcish leaders. Thankfully they are out of magic arrows.

The goblins and kobolds are proven themselves to be useless to either side. The goblins utterly fail to be be helpful to the party, only attacking when the orcs rout. The kobolds are equally opportunistic, attacking the goblins once they walk by.

The party owns the battlefield and can escape almost at anytime. They did make one miscalculation. The cleric whipped out a sling and now the orcs are busying themselves copying it. Missile fire has been the deciding factor in combat. The orc leaders have been bearing the brunt of the these attacks.

As expected, the party has leveled up to third level, with the exception of Aleric who is stuck at first level due to his 3 classes. They have also discovered the importance of healing characters.

This is an unusually campaign as the heroes are bent on using tactics over killing. This one session covered about 13 days. They are frustrating their opponents. However, they are slowly becoming aware of the fact that they may end up fighting 3 successive battles with the orcs, the goblins and maybe even the kobolds, all in one day. They know they can't win that war, so they are thinking of fleeing the Caves of Chaos entirely.

We will see next week.