So I've Been Told: Game on Wednesday Night

It looks like we'll be playing D&D Wednesday night. Sweet!
It isn't my Peninsula of Plenty Campaign, it's something else. None of my peeps have played before. They TOLD me what characters they are playing in their campaign. As designated DM, all I have to do is make it work.
The ruleset is my typical smash-up of D&D and AD&D, but I'll probably be leaning heavily on the AD&D rules. At least based on the character descriptions I have been given. "Alright players, go nuts. But you have to use my character sheet." They agreed.
You can download my sheet from DriveThruRPG for free. Technically, it's pay what you want, but we're in the middle of a pandemic+, so spend your resources wisely.

I think the players believe they are throwing me for a loop. They are not. The opening hook wrote itself as the described their characters to me. Ready for storytime?

Ever have one of those dreams where something is chasing you? It's dark and you don't know where you are. There is something's close behind, you're out of breath and dead tired. You can't see it directly, only hints and glimmers of whatever came out of the night.
Maybe it's more than one thing. It feels more like a swarm of angry things. And the safety of where ever is far, far away through the night and the forested hills.
But you're not dreaming. The chase has been going on for days. The nights are the worst. The women and children from your village fled while the defenders tried to hold them back. You were fools. It didn't work and now you run, just like the elderly, the women, the children.
The only difference is, you're better supplied.
A couple of days back, you gave away all of your food and water to some villagers. It terrified you, because they aren't your villagers. The chase is happening to everyone. Even people you don't know. From places you never heard of.

You don't know these runners, but you are getting to know them. Out of the darkness comes the now familiar silver-blue flash and the jingle of bells. The unicorn must have killed something with her horn. Again. Blue, violet and purple after-images blot out your vision. It's a good thing your eyes were closed, other wise you would have been blinded. You eaten so much radiation in the past couple days, what's a little more?
As you stumble in the dark, the druid with the dagger and the infant steadiest you before pushing ahead. He mutters, "Mind the stream". The guy in the hoodie, armed with a metal pipe splashes into the water. Behind you the one that smells like spent gunpowder, rattles like hot brass as he or she moves in the shadows.
And then you see it. Salvation. The hill fort. 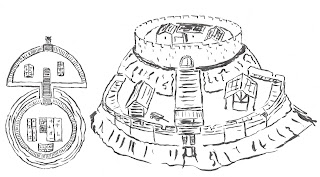