A witch's staff is empowered by contact with owner. It is a personal magic weapon, which cannot be wielded by anyone other than the mage, while the owner lives. If the owner passes, the staff will attempt to reach their next closest family member. Failing that, it may pass into the hands of a dear friend.

The staff has several benefits. First, it improves the wizards night vision, so they may see and read more easily at night. It is more like low light vision than infra or ultravision. There must be some source of light, even if it is starlight. Second, it confers a bonus of one to the mage's Dex bonus, allowing a +1 even if they do not possess an ability score high enough for a Dex bonus. If the mage isn't entitled to use their Dex bonus, they lose this bonus, too. The witch's staff is a +1 weapon that will inflict 1d4+1 in melee or release a dart of energy up to 20 feet for 1d3 points of damage. The dart of energy is a once per round effect, they do not gain more darts per level, nor can the darts be fired as fast a mage could throw a physical dart. The mage may not swing and fire a dart in the same round. 1d4+1 and 1d3 are not typos. This is the cost of having a staff that does multiple things. If the mage is reduced to 4 hit points or less, the staff will heal them for one hit point a day, in addition to any natural healing. If the mage is tied up and is in contact with the staff, the staff will cause ALL knots within 10 to 60 feet (1d6x10) to unravel, freeing the mage and possibly others. It will do this at the time of the mage's choosing. It can and will unravel the knots on clothing, shoes, armor, nets, etc. and this function is all or nothing. It is not selective.

There are dangers to creating or owning a staff like this. If someone grabs the staff from the mage's hands, it will sting them for 1d4+1 points of damage and they will let go. The mage may swing at them in the same round. If the staff is left someplace and someone touches it, it will sting for 1d2 point damage. If the person persists in their efforts to pick up the staff, it will "bite" them for 2d4+2 points of damage. The wound will actually look like an animal bite, even though the staff has no teeth or mouth-like structure. This is normally fatal to average people and the law may take the staff owner to task over this. A person who is bit by the staff and survives will not willing enter line of sight of the staff ever again. The staff will not bite or sting animals, family members or dear friends.

The wielder of such an item cannot be multi-classed or duo classed, EVER. The witch's staff will not accept them and will not reveal any powers to such a person.

Domesticated animals, even hostile ones, cannot be harmed by the staff even if swung at them. If detected for, the staff has an alignment of true neutral. This has no bearing on the mage's alignment or their ability to use it. It's a tool.

Owning a witch's staff will reduce the wielder's hit points by one per level. A third level mage will have a max hit points of 9, plus a Constitution bonus, if any. If the staff is lost, destroyed, etc. the hp loss is permanent. Replacing the staff with second staff will drain an additional 1 hp per level from the mage. A third will do the same, leaving the mage with but 1 hp per level. Taking up a fourth staff will transform the mage into a green slime, even if they had a Constitution bonus or some other magical means of boosting their hp over 1d4 per level. They cannot be resurrected or reincarnated, as they aren't dead. Nothing short of a wish will allow them to recover. If wished back into their normal form, they will be unable to wield a Witch's Staff.

This weapon was designed for old school D&D and AD&D campaigns, but should be usable in other systems. The terms "witch" and "mage" has been used throughout so that users could be an actual witch, an illusionist or a magic user. It is not appropriate for druids and clerics.

A hit, a palpable hit. 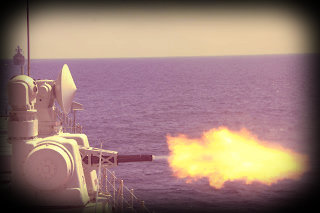 I am off hunting swordsmen, so of course I can only find heralds. This morning, I decided to ensorcell my baby blue kakore runestaff. It was a good choice.

I tagged him with DC which triggered a flare from my kakore staff and then an ensorcellment flare. I wish someone had been there to applaud.
Posted by Phil Viverito at 8/10/2019 08:07:00 PM No comments: 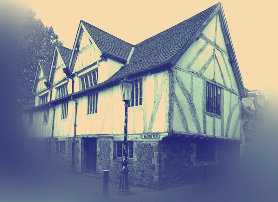 There is a quick trick to figuring out if an item has a temporary enhancive bonus. Take it to the Adeventurer’s Guild and attempt to recharge it. Not only does this detect an enhancive you might not know about, he will tell you if it is full or not.
Posted by Phil Viverito at 8/10/2019 08:02:00 PM No comments: 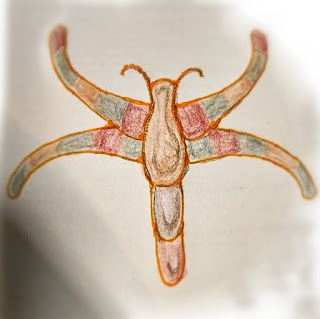 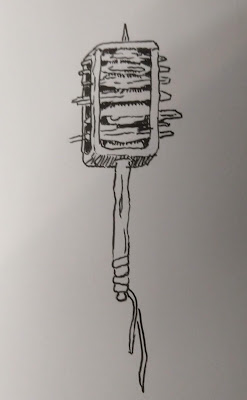 
Now, the commercial. I have a little book called Zero to Hero: Uncommon Commoners, over at DrivethruRPG. I am obviously thinking of writing another and Gnolls might be the subject. Please let me know what you think in the comments.
Posted by Phil Viverito at 3/24/2019 11:53:00 AM No comments: