I've always wanted to write about the subject of coinage in D&D, but haven't had time to do the research until recently. And not half the research I wanted to do.

But from what I have, I can lead with the chart from the e1 PHB:

If you are playing a game based on D&D, this chart should be familiar to you in some form or another. Two weeks ago, I wrote about what a Roman soldier would carry and got into the coin-based encumbrance system. That led to a follow-up post from Ian Borchardt on Mewe that he graciously allowed me to post here. And this morning, I spotted a post from Stephen Wendell about "Holmes on a Coin’s Weight", which covers a realistic treatment of the mass of coins.
OSR style games really went out of their way to make a system that while idealized, is actually excellent enough to hold up for decades and decades. It's actually amazing.
But what about Antiquity Tuesday?
One of my favorite historical personages is Diocletian. He lived from 242ish to 311ish and brought about the Crisis of the Third Century. Yes, the 3rd Century was chaotic enough that we don't know the exact years. Whole books exist about the Crisis of the Third Century, but one of the crises was the triple problems of coins, inflation, and prices. And Diocletian actually failed to fix it. But he tried. And it was a hell of a try.
Just like in AD&D, he decided the issue could be resolved with a simplified system of just 5 coins. The system was based on a silver coin worth 100 denarii. There is some variability in these values and please forgive me, but I don't trust this table in name or values. Take it as a guideline:

aureus 1,200 denarii
argenteus  100 denarii
nummus (a silver-washed coin) 25 denarii
bronze radiate 4 or 5 denarii
copper laureate 2 denarii
What is interesting about this order or valuation is that bronze appears as a valuable metal. Both brass and bronze are alloys of copper, and that meant that bronze age implements had an innate value due to the material that they were made of.
When compared to the AD&D valuation, we still have five coins, but electrum and platinum appear on Mr. Gygax's list. Electrum is an alloy of silver and gold which would have been more valuable than just silver and platinum wasn't discovered by Europeans before the 1600s. They may have known about it but it wasn't described until it was discovered in the New World.
What I find wonderful about these two lists is that both are meant to be simply used. And they are perfectly logical for the system each is attached to.
Unfortunately, Diocletian was unable to resolve Roman's economic problems, which were many. After he reformed the coinage, he call back tons, literally tons of old coins and replaced them with new ones. The Romans understood market forces, a lack drove up prices, and a dearth dropped them. What they didn't get was the variable value of coins themselves. To a Roman, a coin was a coin, was a coin.
Parallel to this, Romans understood the dangers of debasement which is why Diocletian replaced so many coins. And this was also the very reason that other emperors debased coins in secret. They knew it was playing with fire. And Diocletian believed he fixed it but he didn't call back nearly enough coins to fix a centuries-old problem.
But this was not lost on Mr. Gygax, debased coins or washed coins show up a couple of times in modules like B2 Keep on the Borderlands.
A possible explanation for this lack of vision on Diocletian and every other emperor who monkeyed with the coin system was the hands-off nature of minor transactions. Roman grew in both space and time. Diocletian was trying to fix hundreds of years of bad coins on top of not seeing the effects of how Romans used coins on a day-to-day basis. As regions were absorbed into the Empire, so was their coinage. Who cared if people bought bread with denarii-based coins or some old copper from a defeated enemy? A coin was a coin. Fixed and constant.
He had no idea what a battle he was fighting. But Diocletian didn't accept the failure of logic or reason. He decided that the actual problem was the merchants. Those evil little price gougers were running up the prices. So he tried to put a stop to it. He penned the "Edictum de Pretiis Rerum Venalium" or "Edict Concerning the Sale Price of Goods" or when we are placing blame, "The Edict of Diocletian".
This is one of those seminal works, like the Domesday Book. It is a list of maximum prices allowed for 1200 goods or services in denarii communes or "common coins". Unsurprisingly, it looks suspiciously similar to a gamer: 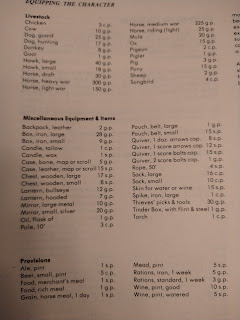 Brilliant minds work alike. This is a totally workable system... except Diocletian had to abandon his because it simply didn't work in his world, unlike Mr. Gygax who built from the ground up. If only Diocletian could have wiped the slate clean, I bet his system would have worked as well as Mr. Gygax's.
What is awesome about Diocletian's cataloging of items is it reveals how people in antiquity thought. We know the Romans like to have 8 soldiers together carrying 3 pilums or 3 caltrops. But when it came to quills, they wanted to have a set of 4 in a leather box. We also know that most wines were of the same value when fresh, but worth somewhat less as they age. What is notably missing from Diocletian's list is weapons. No one bought a weapon, they paid for the services of an armorer who made weapons. Oddly, sharpening a sword, an axe, and a spear appears under several different categories of services. There is a difference in the task depending on the object.
It really is amazing that someone would think of such a system several different times for completely different purposes. For the Romans, it was life and death. For us, it's a game.
Posted by Phil Viverito at 2/15/2022 10:21:00 PM No comments: