My first go at documenting the build process for the Bandai 002 X Wing Starfighter in 1:144 Scale.

These models are remarkably tiny and detailed. The beauty of these things are the plastic quality is high as is the craftsmanship. The sprues are designed in such a way that after trimming, there is very little sanding or smoothing.

Every part is so tiny. But Bandai designed these kits with keyed parts. The keys prevent you from placing the wrong piece in the wrong place. One word of warning. If you dry fit some of the pieces, they are very, very hard to get apart. Just skip dry fitting.

I'm decades out of practice, so mistakes were made. I'll detail those last. 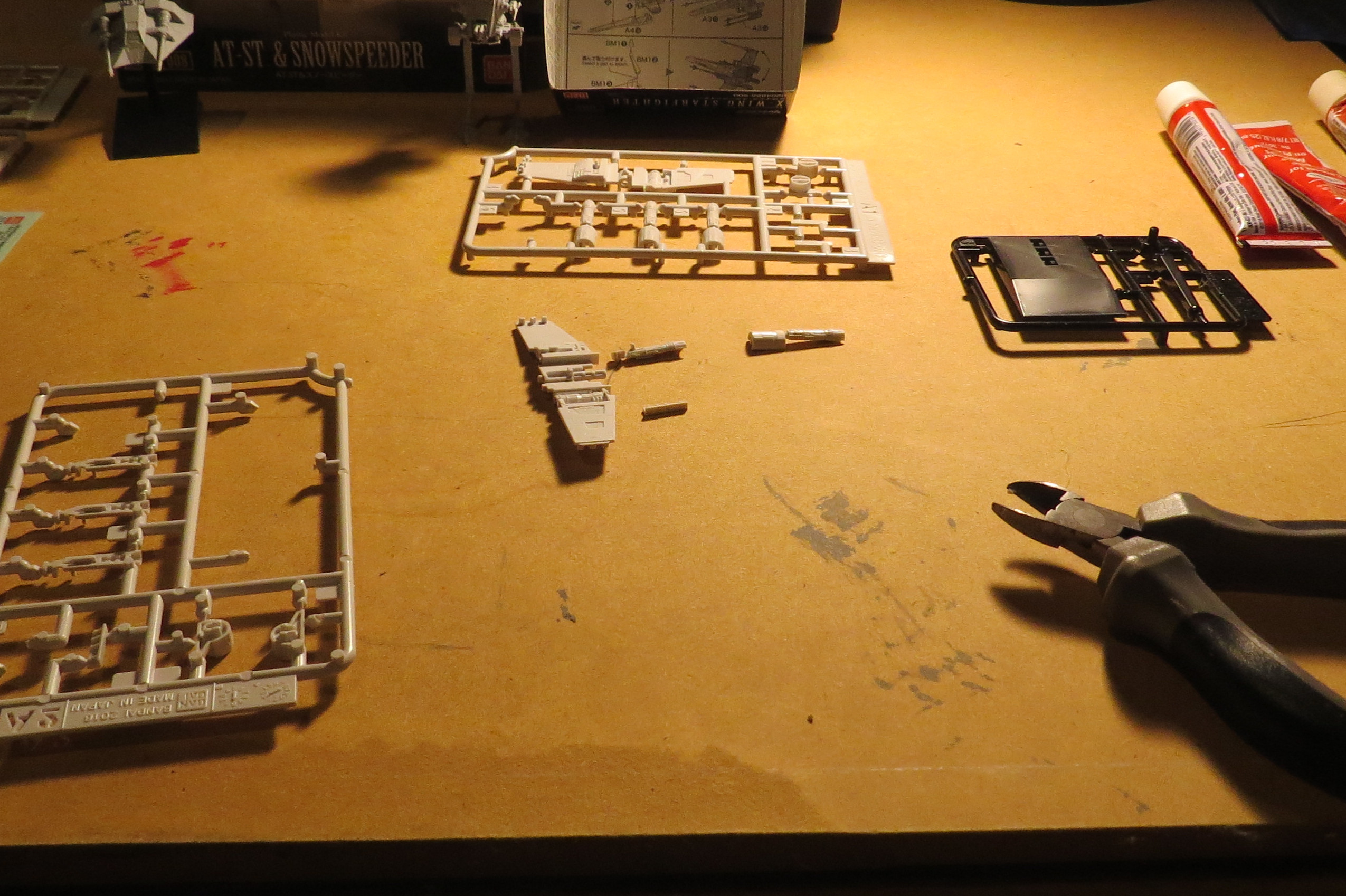 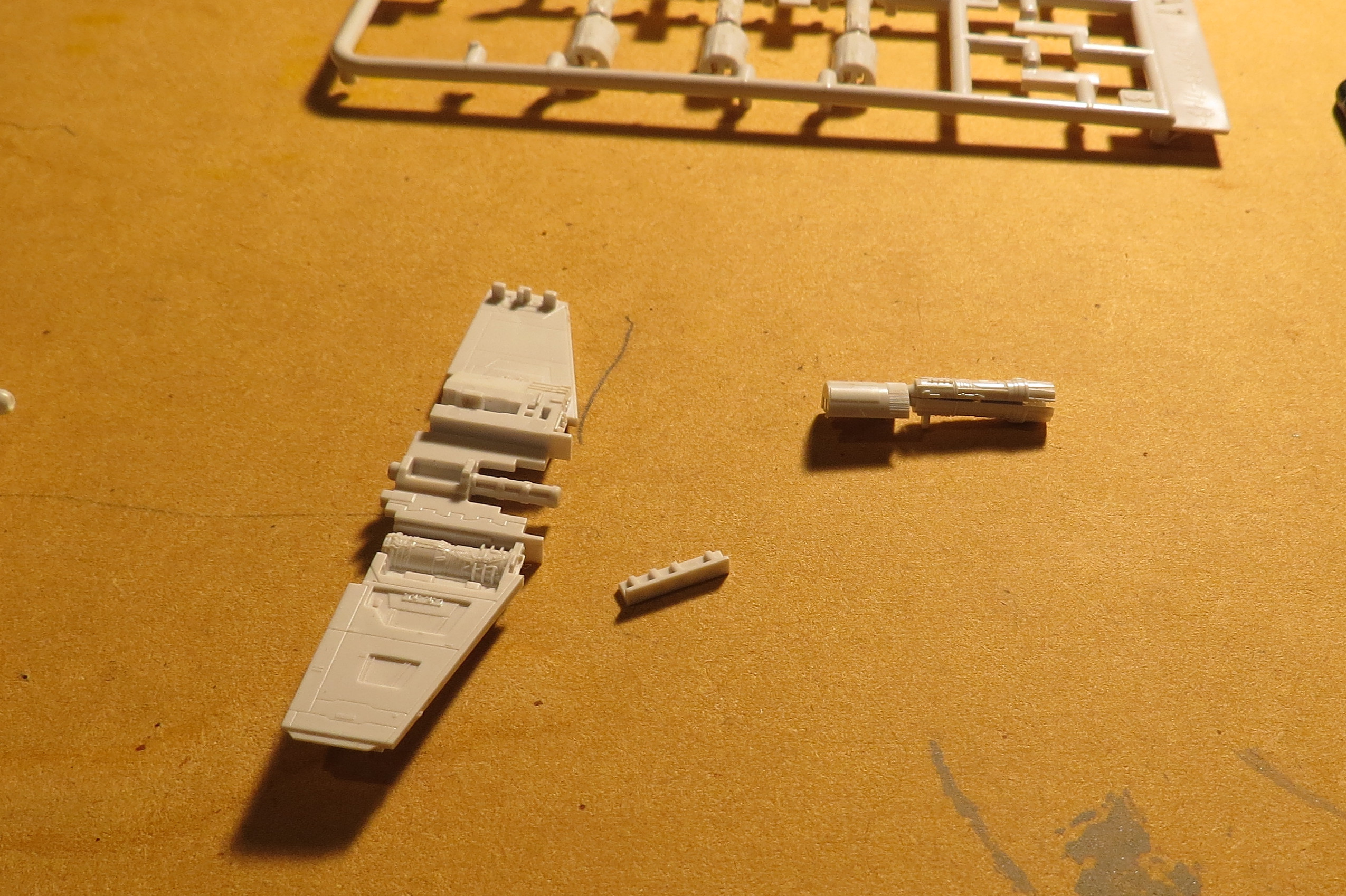 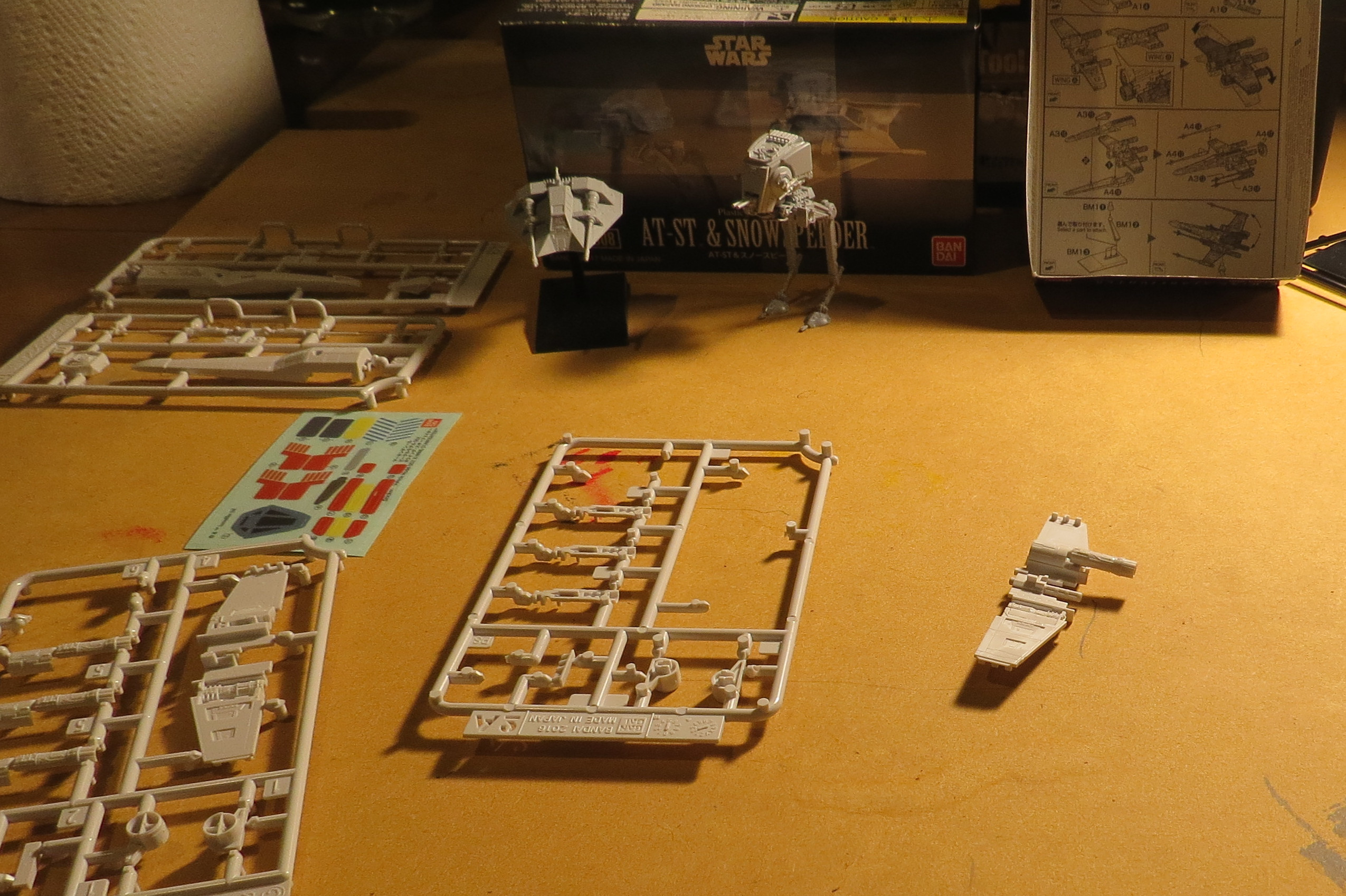 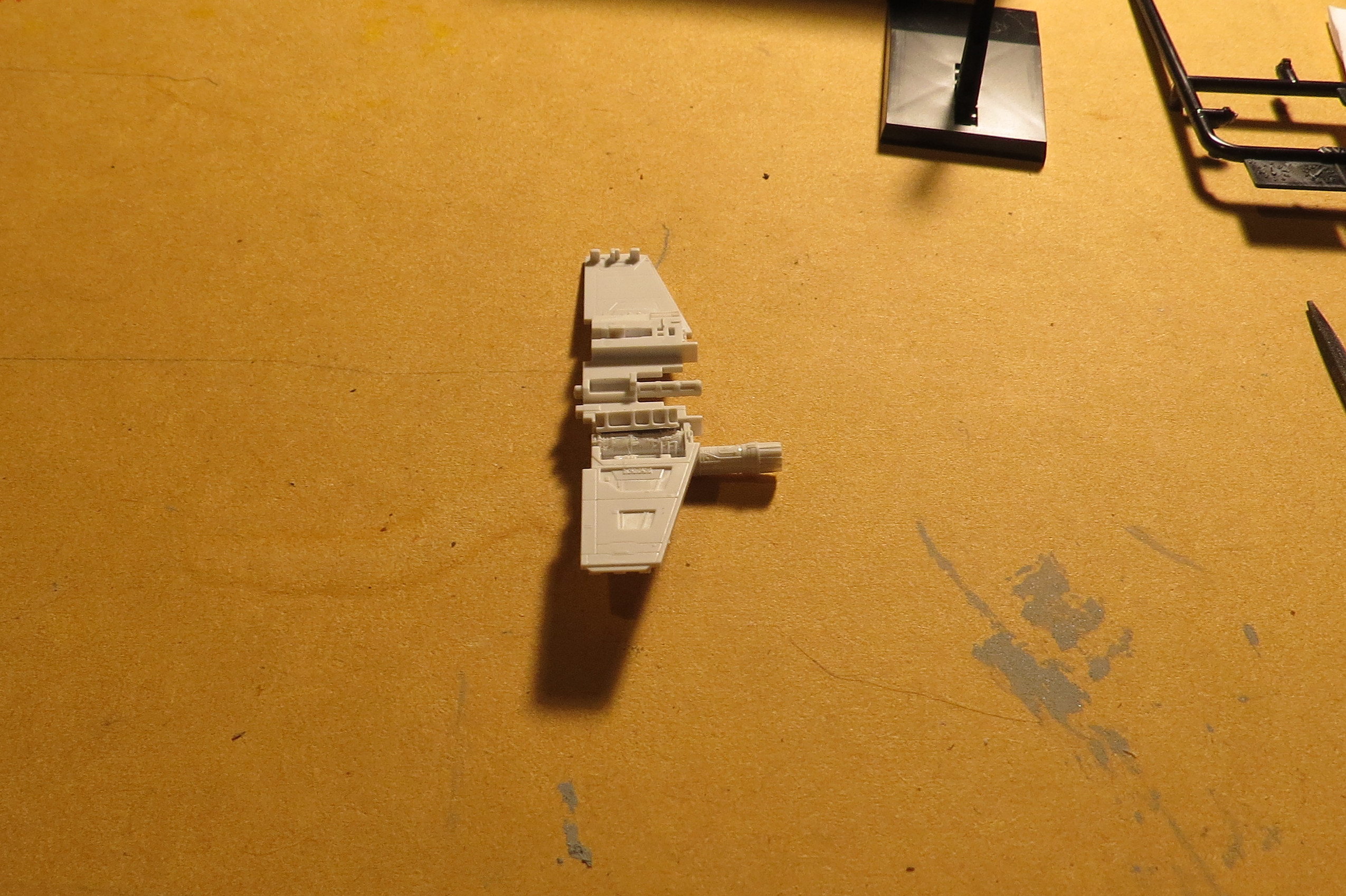 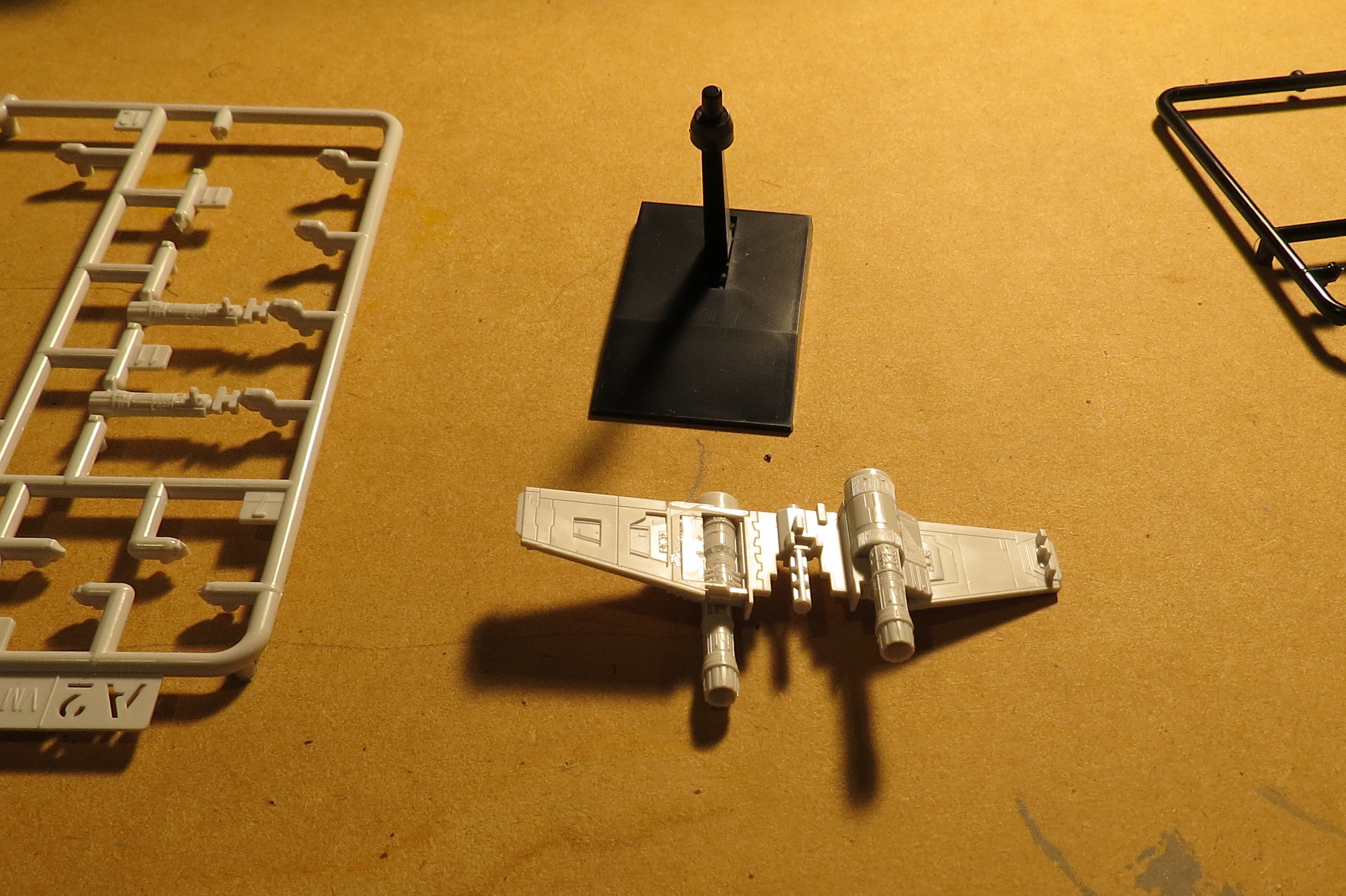 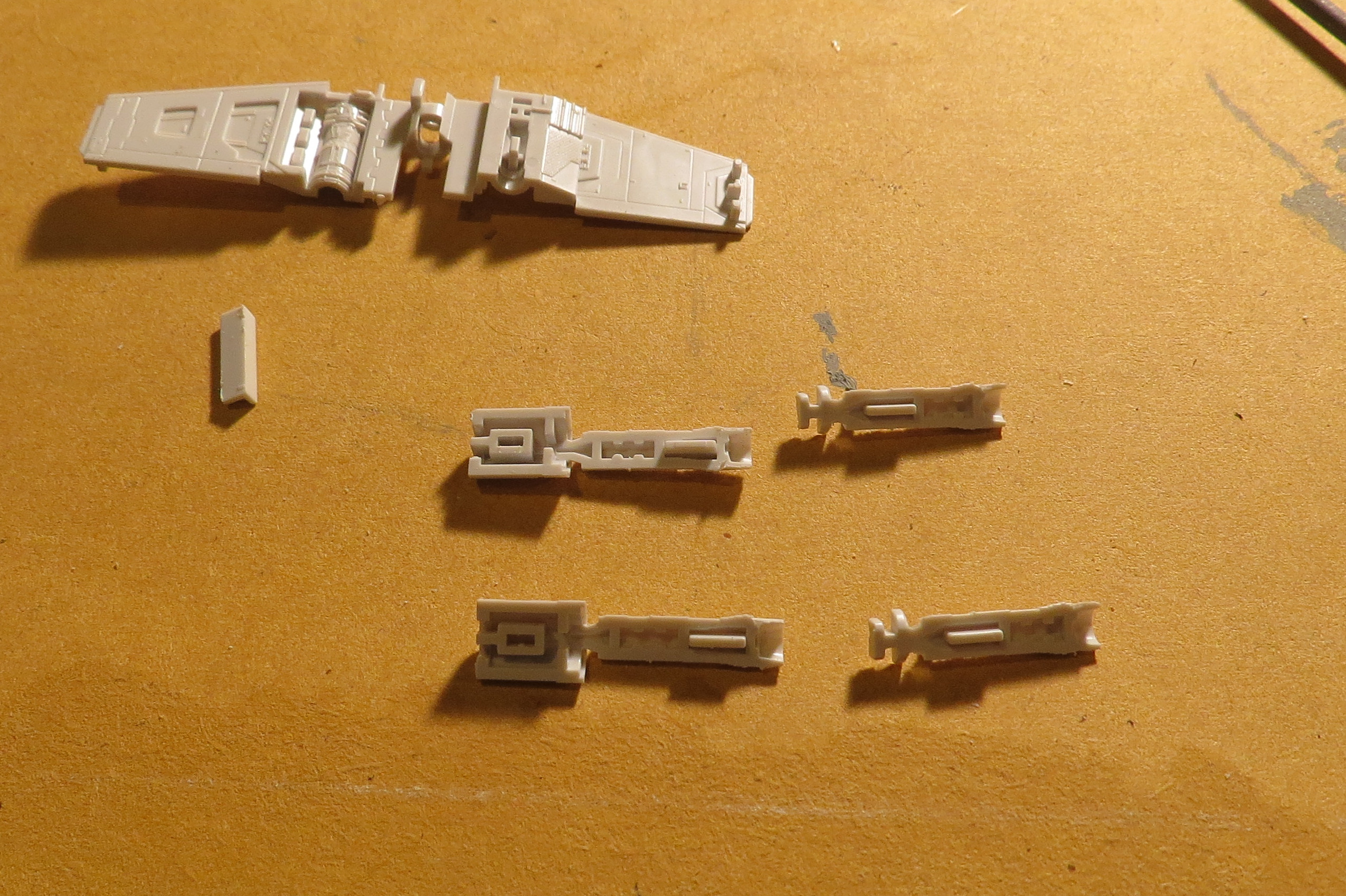 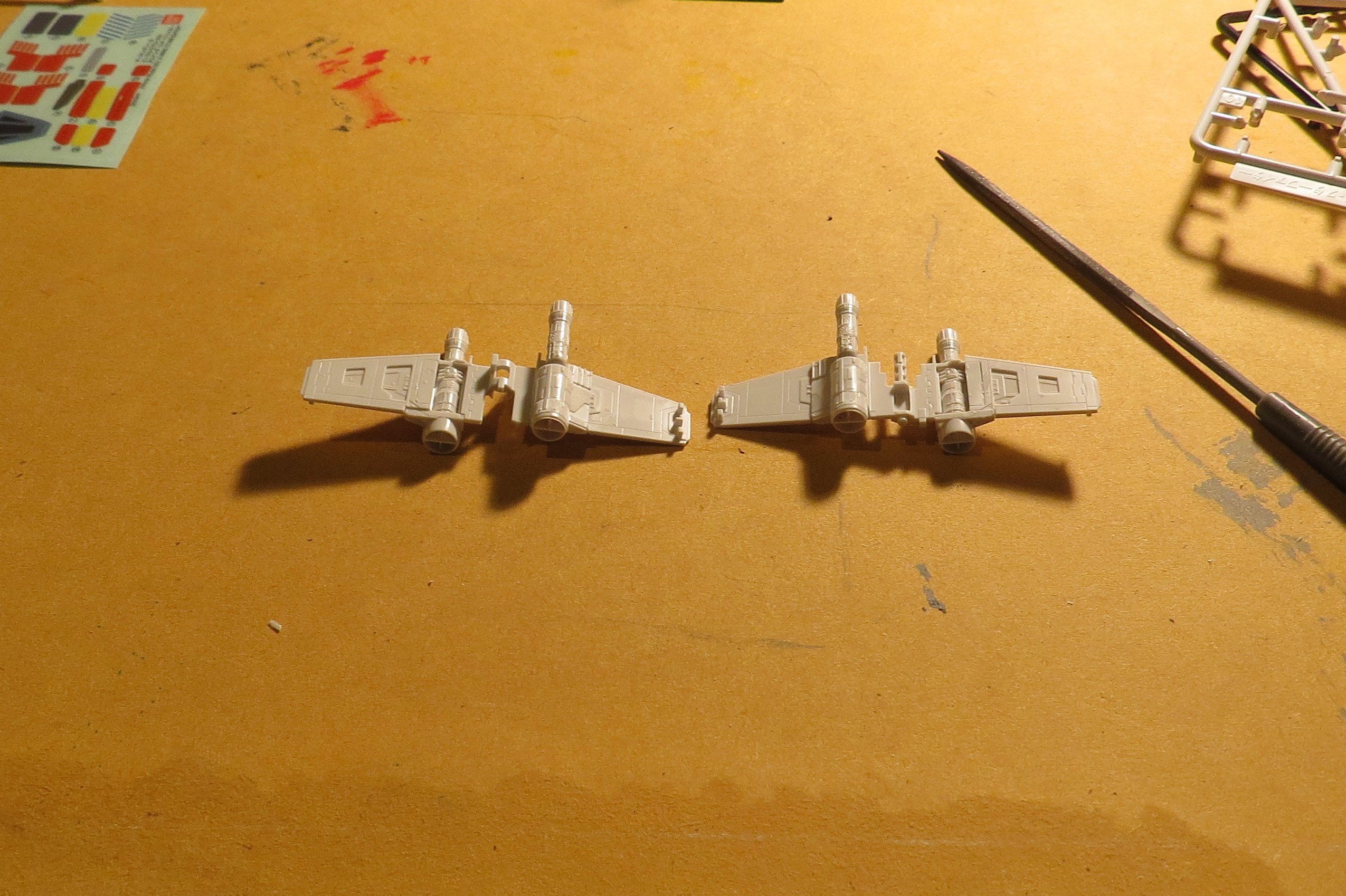 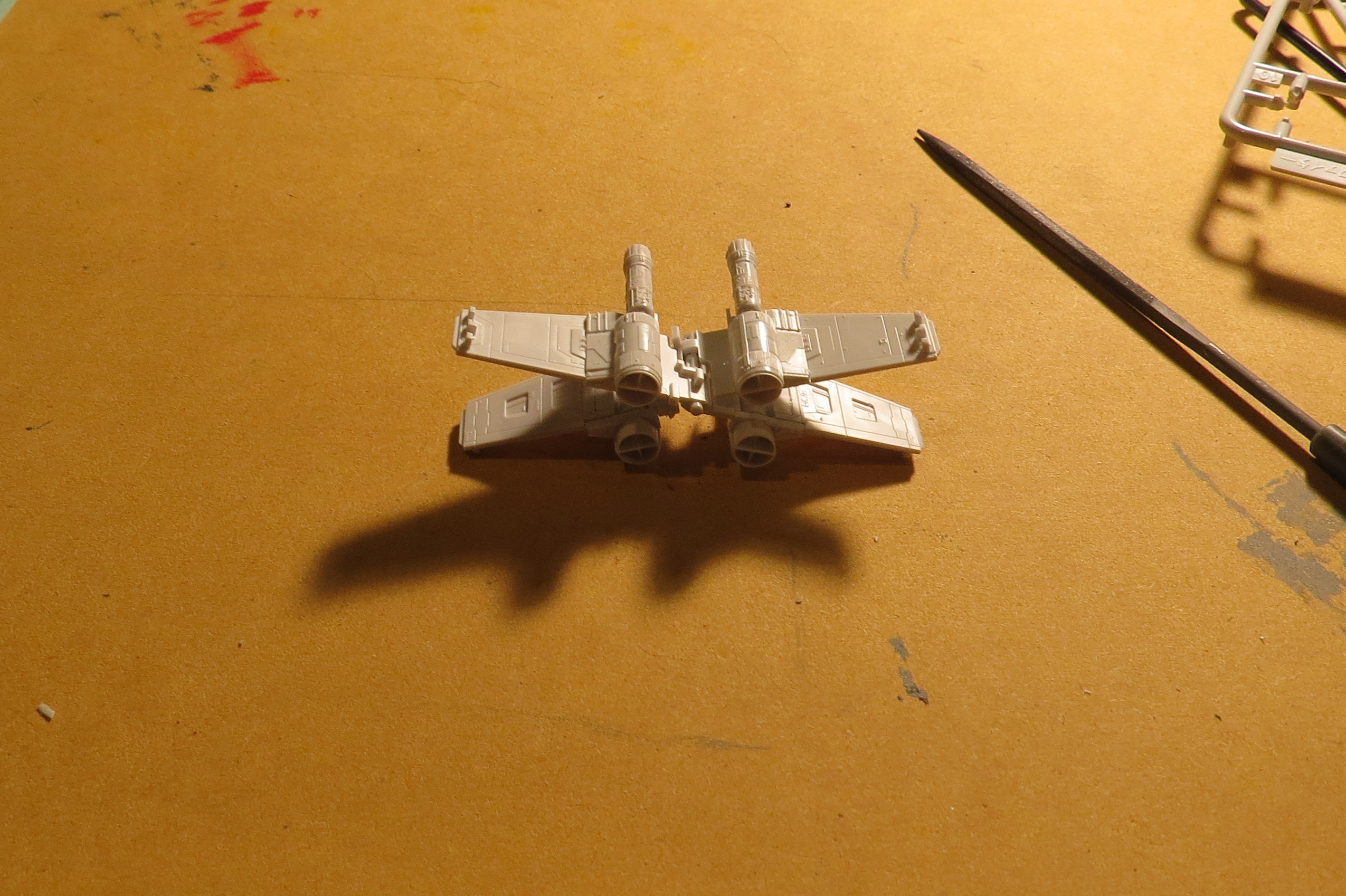 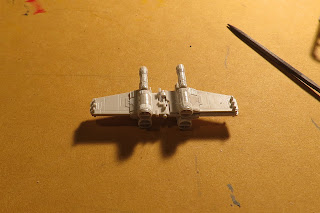 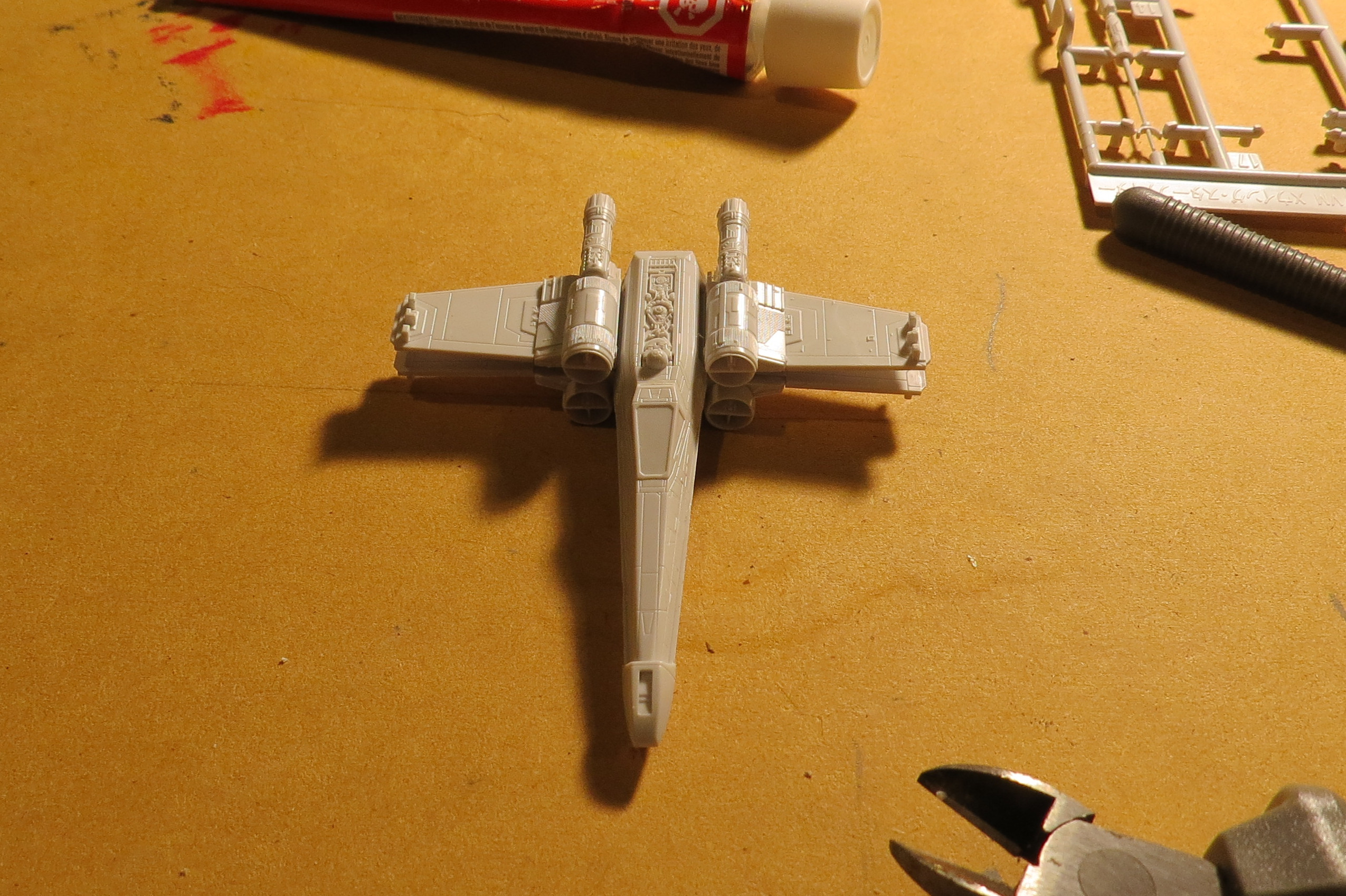 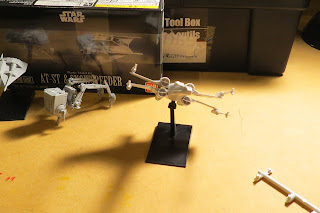 A few details were hard to work on. Those two wings snap together on a pivoting hinge. It requires a lot of force on a tiny model. I found I couldn't do it with my hands and no tool seemed correct. I end up using a pencil sharpener by lining up the hole in the sharpener with the center of the hinge and pressing down hard. 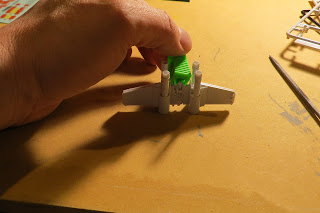 It worked so well that I added that little sharpener to my tool box.
Now, the mistake. 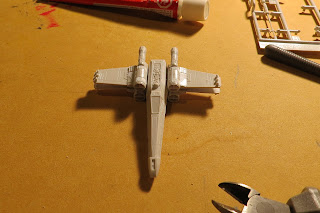 This image should have been a clue. That pivoting hinge runs down the back half of the main body. Somehow, I missed getting the hinge in the back hole which supports it. It felt right.
Yeah, no. As you can see the wings don't close. Nor do they open all the way. They have a springy feel to them and the right side engine naucell presses against the side of the body. Taking pictures at a jaunty angle hides the mistake, but I'm going to give this model another go. 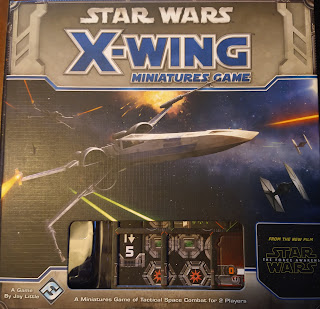 I picked this game up for my son a few years back and we played it a lot. My son has his X-Wing and TIE models on a shelf in his room. I started this post at 4:45 am, which is why you won't see images of those parts in this review. I'll see what I can do when my son and our sun gets up.

As I understand it, this system is full of power creep which really doesn't effect the gameplay of this set. This is also the first edition rules, which is different than what is currently on the market. So on to the game review.

This version of X-Wing was produced for Star Wars: The Force Awakens. I had to guess at the date because there isn't one on the box. The box is solid, it will hold up well on the shelf. Inside are 3 booklets, totalling 44 pages of information for game play. The graphics are incredible and a valued addition to the game as they present gameplay information, not random photos from a at the time unreleased movie. It's a good thing the box is as sturdy as it is, it's loaded with parts. 3 painted models, cards, dice, tokens, templates, etc. It's a lot of parts, but nothing extraneous.

The first play guide has you in the seat of your beloved X-Wing or TIE fighter and blowing the snot out of your enemy in minutes. The instructional method is a familiar one: learn the basics as you play, add more rules, play again, then master the all rules and go crazy with new adventures.

The first session can be played in 10-30 minutes as you learn the rules. Its really nice. My first impression of the game was that it was a copy of Top Gun**. There are some similarities, both where made for a movie, both had some cool tokens and a move, react, shoot, repeat method of play. But that is where it ends. 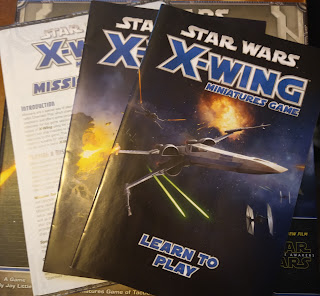 There is one thing missing from the box that sets this game apart from the others: A Game Board. There isn't one. Players are told to find a good sized table, lay down some felt or a black table cloth and have at it. Sure, you can buy one but the rules clearly state it isn't necessary. Movement templates guide the ships, unlocking them from the play space. The lack of a board is actually a strength. Not having a grid or hexes to lock your pieces down gives the game the same fluid dynamic of Star Wars space combat. You feel like you're in the cockpit.

This game brings back a lot of memories in one tiny box. I have already mentioned that it felt a bit like a better planned out version of a Top Gun** Movie game from the late 80s, which was an apparent skin of the Aerotech game (which is available via the Battletech Compendium at DriveThru. It has the movement guides like the turn keys of Car Wars. Combat is handled with dice where each player rolls dice at the same time like Risk, with the twist that the defender's dice eliminates the attacker's damage. There is a I-go-you-go approach to terrain, which is a hell of an old school call out to games like WRG. And it's Star Wars themed.

First edition games may seem rough, but this one isn't. Gameplay and rules are tight, with carefully considered options. Gameplay pops and snaps into place naturally, it's like something from the Spice Mines of Kessel. And since it's a vehicle for selling models as add-ons, it very successful at that.

*While intended as a two player game, there are 3 models which could be divided among 3 players. For complex missions, one could add a game host. My initial playthrough was with 3 young children each having a model and myself acting as a gamehost, so 4 people can be involved. Whatever you do, it just works out.
** I wish I could point you to the Top Gun game I had back in the 80s/90s, but I have never seen one except the one I bought from the shelf of my local Hobby Shop back when the movie was hot. Since I lost my copy, I don't even have a picture. It was pretty cool at the time, coming with about a dozen tiny plastic airplane tokens.