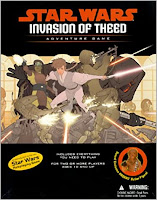 Last week, I posted a bit about Star Frontiers. I've got a strong urge to play a Sci-Fi themed game. Star Smuggler is all played out. I'm still waiting on some friends to play Traveller, but our county just shut down due to the pandemic scatter all of us to the winds. I was going to introduce my Star Smuggler characters to the Star Frontiers worlds, but the rules are too far apart to port anything except name and general talents.
Then I saw Invasion of Theed from 2000 sitting on my shelf. I got it for Christmas one year, poured over it for a bit and forgot about it.
Now, it's actually exactly what I am looking for. I had thought it was a super boxed set module, but it isn't. The set is basically a starter set. It's everything you need to play WotC's d20 Star Wars. They billed it as an adventure game, but it's more than that.
In the box is two booklets, a start sheet, counters and tokens, a folio of character sheets and maps. I don't know if dice were originally included, but requires the standard D&D dice. Apparently, it also came with a Chewbacca figure, but that is long gone.
I have a thing for maps and artwork, but this set's clear winning component is the character sheets. They are full color, two-side 11x17" sheets with all of the statistics you need plus gameplay hints. I had no idea they were this good.
I now have the urge to buy a large format printer/scanner combo.
I'll point you back to my review of the d20 Star Wars Core Book. I didn't set out to write a review, but this set is easily a five star product. Maybe even a five gold star product like Nate Treme's Moldy Unicorn. I don't give those out easily, maybe one every year or two. I'm pretty surprised at that, because I didn't think much of it when I received it back in 00 or 2001.
As an abridged rule set, not much is missing. Since your using pre-genned characters, you don't need to roll anything to start. Oddly, the characters stats don't appear on the front of the sheet. And that's not bad. The front page mentions all of your combat abilities so it doesn't matter what the stats are.
Another oddity of the rules are the lack of armor class and such. All actions are determined by "a roll". No "attack roll", no "saving", no "fortitude" stuff, just a target number and the word "roll".
The DM facing material is the same way. Which makes this more of a complex board game or linear programed adventure. It seems very suitable for solo play, which is what I aim to do. As near as I can tell, every simplified rule conforms with the Core Rules, which is nice.
May the force be with you...
... And so with you.
Posted by Phil Viverito at 11/18/2020 09:41:00 PM No comments: 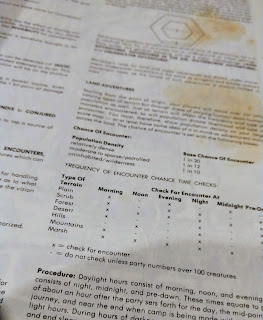 Email ThisBlogThis!Share to TwitterShare to FacebookShare to Pinterest
Labels: AD&D, amazon ads, D&D, Never Do I Ever 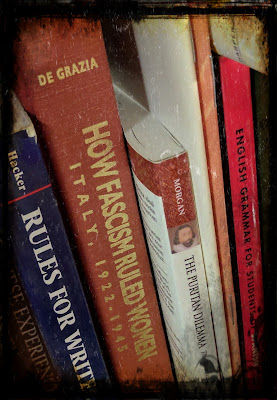 Pio is a novel set in Italy before Mussolini's rise to power. It has sat on the back burner for a while and there it will remain until I do some more research.

To that end, I am reading How Fascism Ruled Women. While it is set at some point after this novel's timeline, the effects of fascism were already becoming a powerful force on society. Reading the end point is kind of backwards, but helpful.

I order a physical copy from Amazon, which was a little pricey but worth it.

What I have found is that I need to back up in time to really capture what and why things were happening in Italy between the World Wars.