I have a handful of ideas in mind for new projects, hopefully, to offer on DriveThruRPG. This one requires a lot of stippling and some digital magic which means I need to start practicing now. The interesting thing about prepping is the samples I produce as the practice often don't look anything like the imagined project.

For this item for example: 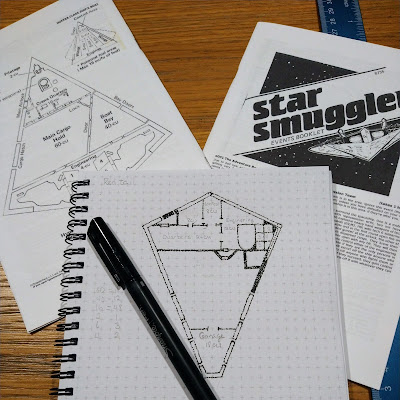 Obviously, it is a spaceship in the theme of Star Smuggler. My project requires a fairly large map of a landscape so it is a conceptual mismatch. The other item I am working on could end up as framed art. Again, it doesn't remotely look like a map. 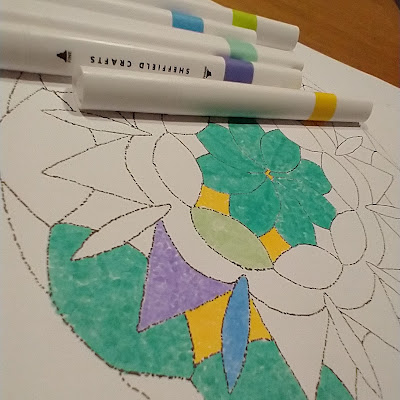 But there is a method to the madness. I don't want to work on landscapes or maps while practicing so I don't burn out in the middle of a large project where I need to produce a large landscape map.

As far as digital magic goes, I started this portion last year, before this new map idea came to mind. That was a simple test of my digital abilities, removing and then adding text to a series of extant images. 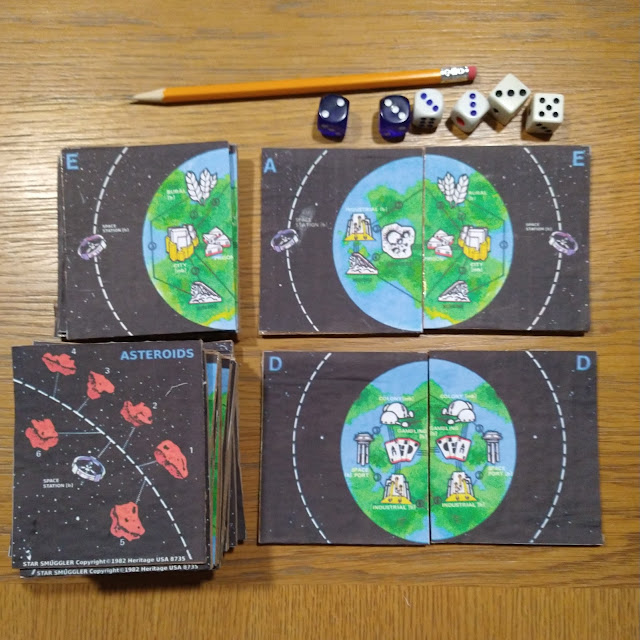 These are the tiles for Star Smuggler. The original set came with a series of tiles that required flipping one tile upside down to create a planet. I flipped the images, removed all of the text, healed the background of that text, and added new text to replace the old text. They came out pretty nice, but once I was done, I noticed that my healing of the background image looked different than the original, so I had to repeat the process to get a complete set of matching tiles.

A lot of people have created their own world tiles for Star Smuggler, but I have never seen anyone use the original art.  You can check out some nice ones on Board Game Geek in the link. These are very slick and modern looking as opposed to the 70s or 80s look of my copies.

(I'm sorry, but due to the distro notices on this game, I can't share my files. Mr. Sustare didn't get paid for this game but has graciously allowed the above websites to produce digital versions of the game. It seems fair enough to me. If you know Mr. Sustare... maybe you can get us in touch so I can ask permission or give him the files to post. It's not really mine so they need a good warden.)

So, what is this project? I have a B/X/AD&D campaign world that has 40ish years of history and I would like to see it in print. The first part of the project is the map of The Peninsula of Plenty. It is a vast area that does not lend itself to hex mapping.

In this world, there are many strange things. For example, there are magical rail lines, newspapers, and consumer-grade magic items. I have reporters, treasure hunters, and historians of great renown populating the world. Magarven is the Peninsula's most outrageous self-promoter believing himself to be all three. Take a look at his Last Polyandrion, a map of a magical edifice of unknown meaning and purpose.

I imagine that Magarven would very much like everyone to know what a smart and well-traveled Drow he is, so I would like to publish a series of books by him. This series will have an in-universe perspective and would contain 9 or more volumes. The collection is rules agnostic as it will be a traveller's handbook to the Peninsula.

The reader would rapidly come to the conclusion that Magarven the Mad is not all there. As The World's Most Popular Drow, one who embraces both his heritage and fame, he will do or say anything to perpetuate being a hero when he is not. He is clearly not at fault when his human fans disappear, he has no idea where they went, and tales of sacrifices to Lolth are completely out of bounds. She was never a demon queen. How unfair to speak such untruths.

The last part of this project would be to create a series of player's or DM's handbooks to account for noticeable differences between my campaign universe and the default B/X/AD&D setting. This would be a series that would stat out major parts of the world described by Magarven's Handbooks.
I have rambled too much. But let me throw in one last plug. The notebook imaged above is available on RedBubble if you are into such things. There is a really good sale right now, so you can score one for less than 9 bucks.
Posted by Phil Viverito at 11/07/2022 11:01:00 PM No comments: