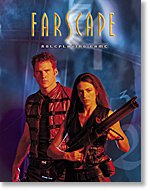 Like The Player's Handbook, you pick a race, a class, generate stats, select feats, skills and powers, then select equipment. All of that works well, it's a proven method utilized by many products in the d20 line. And that is where it gets weird. I can't point to a single thing that would require another book, which is probably my gamer hack-it ethic running wild. It sure seems odd.
February 16th edit:
I see it! This book is missing two parts for running a home campaign. First, it doesn't have the Experience chart. Second, it doesn't explain CR. Really? Because those two omissions actual require two books, not one. You kind of need the DMG and the PHB.
But not really, which sort of BS. The information missing from the experience chart is in the d20 SRD. Like the one on Hypertext d20 SRD, which is an excellent site. I give it 5 of 5 stars for helpfulness. You'll also need a challenge rating calculator if you want your players going against monsters. Or Critters as John would call them. Again, Hypertext d20 SRD to the rescue.
I am not sure why I didn't see this at first. It could be that edit blindness everyone gets when looking for extraneous words and typos. Or more likely, I couldn't see it because I would want my players to be the cast of the show. Be the heroes, which makes the experience chart unnecessary.
I feel the missing Challenge Rating is actually in universe. The heroes throw in against anything they can, anyway they can. Crackers and Nuclear Weapons are both combat items in this show. CR was never a factor when it came to putting the heroes in the action grinder.
After finding these two omissions, I would suggest one other change for the at home game. Use Vitality and Wounds. Farscape has simply relabeled Hit Points as wounds. Zero wound points is out cold, -10 is death. The WofC Star Wars RPG (click for that review) used Vitality and Wounds, which I feel is more cinematic. Vitality is how much punching around you can take, while wounds are limited to taking serious a blaster shot. One will knock you low for a day while the other one ruins your year. Also, considering how Control Points are used to activate powers, this game has more in common with Star Wars' Force Points than D&D spells or spell like powers.
Back to your review, as it was written back in January of 2020.