Back in 1980s, Battle Tech was my favorite tabletop game. It was quick and easy to play. However, I was baffled by the plot line and story. I'd make up my own stories that covered the bases.

What I really enjoyed was Robotech, I totally understood that plotline. At some point, I collected all of the Palladium game books. However, I was baffled by the difficulty in using the rules. It could take hours to kill one opponent.

Then it hit me. I could use Battle Tech to play Robotech themed battles. Back then, the Unseen were common mechs between Battle Tech and Robotech. They had the Veritechs, they had the Maurader which was an Office's Battlepod.

But what they were lacking was a standard Battlepod. If I could mash up Battle Tech and Robotech, and devise my own stories, I could certainly make a Battlepod.

Yeah... I'd kitbashed some models together, but whipping up a figurine from scratch was beyond me.

I dug through my models and stuff, trying to come up with something. Legs were easy, I used the Maurader model for those. The hips need to be reworked out of wood. Sculpting the engines were simply two U-shaped pieces of balsam. The feet were plastic beads.

But what about the body?

I found a skull ring that was about the right size. I shave it down on the sides and bulked up the chin with that green fill used for models. The central eye was a wheel from an airplane model, 1:144 scale. The guns were antennae and wheels from helicopters.

I had done it!

Given it had taken me hours and hours to build the thing, I realized I could have exactly one. The bottleneck was the skull ring, something I got from a vending machine. Where Robotech depicts odds of 50 Battlepods to each Veritech, I had the opposite.

A friend came to my rescue with a handful of bullets and a can of air vulcanizing rubber. It didn't go smoothly. The rubber reacted with some of the plastics and while it took the shape I needed, it melted the original. 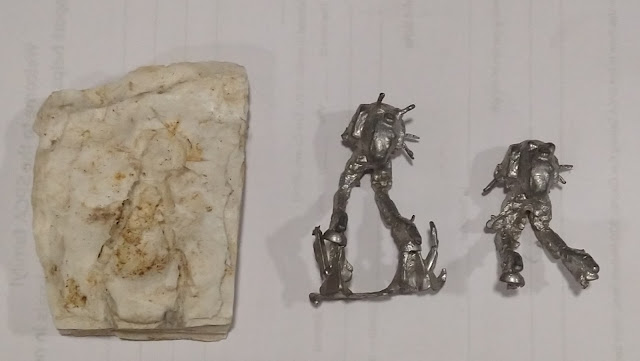 Tonight, I found the results of my experiment. There were a lot of blowouts. Sometimes it was the small details like guns. Other times, it was in the hip/leg joints.

For the life of me, I cannot remember why I abandoned this. Unfortunately, half of the mold is missing. 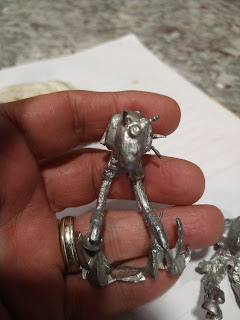 But I do have two useable models to start again. Maybe someday.