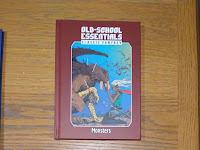 And... it immediately became obvious why this was missing. The original DMG was super weird about it and since OSE has many more character types, the whole thing goes sideways quickly.

In the DMG, page 175 has a breakdown of an NPC for encounters of all dungeon levels. It lists all of the characters in almost alphabetical order and assigns a chance percentage to each. The table assigns a value of 9 for total party size and of those nine, 2-5 are classed characters. The remaining men are henchmen or men-at-arms.

So, if one makes a table of characters found in Old School Essentials, you end up with three different tables. The first table would be for the basic rules, the second table would be advanced rules with race as a character class and the third table would be paired back to just the advanced character types, where race is something else.

I love this quick table so I want one for OSE and I guess that means making one myself. I like it.

But there is a hitch. The basic rules don't match my DMG because it has races as classes. Looking at the DMG does provide some guidance. It's ordered by class with subclasses appearing next. The table clearly shows that Fighters should be the most numerous characters in a party, followed by Magic Users, Clerics, and finally Thieves. All other classes have a tiny chance of appearing, between 1 and 3% each.

But I am working with race as a class so there are no subtypes. There are a couple of ways to get a good list. If simply ballpark the numbers, a party should look like this:

4 Fighters + 2 Magic Users + less than 2 Clerics + 1 Theif. Every other type has a tiny chance of appearing. Hmm, that is rather odd, but I can make it work.

Instead of using the named class as a grouping, I am going to use my Pure, Square, and Semi models. A pure is someone who uses only uses magic to get stuff done. A Square is just like a Pure, but they use their muscle instead of skills or magic. Semis are someplace in between, using magic to supplement their skills or strength. Restating class as type, I end up with:

5 Squares + 2 Pures + 2 Semi, all classes/races appear as one of these three classifications. This is interesting because it equates Thieves and Fighters, and separates Clerics from Magic Users from them. It is different but also allows Clerics to meet the standard of a "Fighting-man" while still being magical.

Basic OSE has Cleric, Dwarf, Elf, Fighter, Halfling, Magic-User, and Thief.  I would group them like this with the following breakdown:

For Advanced OSE with race as class, we end up with a different list.

Before assigning percentages, we'll create the same list with race as the class removed. It's easier to edit that way: 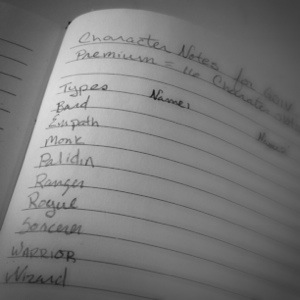 This one breaks down as:

This one honors the original DMG list, but weakens both races and healing magic. I really had to mess with the numbers and it needs to be adjusted to specific campaigns. In my campaign, Half-Elfs are the default race while Half-Orcs and Drow are exceedingly rare. Those last two are literally 1 in 10,000 for NPCs. So, could totally monkey with the specific percentages. It's a good starting point for random NPC but bad for pretty much every individual campaign world.

The second list breaks down a little nicer than the first:

And ultimately, I want the second list to generate some characters. So I roll a 2+1 for total of three characters. 77, 58, and 47

We'll meet these three new characters in my next post. In the meantime, I have put together a couple of downloadable. The documents contain the lists above, plus a blank duplicate so you may enter your own probabilities. The 8.5x11 and A4 are two-column layouts and the A5 is just a single column as a Google doc. If you prefer, I have them in PDF, 8.5x11, A4, and A5.

Merry Christmas! I hope you enjoy.

PS: You can pick up a copy of Old School Essentials Characters, Magic, Monsters, and Treasures on DriveThruRPG.

Two weeks ago, I featured a magic weapon called the Rattlebone, a gnollish mace. In the Peninsula of Plenty campaign, there are actually 5 kinds of Hyaenidae. From largest to smallest, they are:
Spotted
Striped
Brown
Aardwolf
and Flind.

There are also Wild Gnolls, who have a copper age culture but otherwise are identical to one of the other four basic kinds. They are viewed with disdain by the civilized gnolls, except Flinds who find them useful. In this campaign, the Flind appears to be an admixture of Aardwolves and one other kind of Hyaenidae.

The Aardwolf is the most civilized of the bunch. They are fixated on food and language of all kinds and tend to be good cooks. In the wilds, they can eat anything but prefer insects. They can be value guides to players.

The Flinds tend to be leader types found in tribes of Spotted, Striped and Brown Hyaenidae or informally, gnolls. Striped gnolls have an affinity for grey wolves which will act as pack mates. Brown gnolls have a special talent for confusing or driving off Spotted gnolls, which they intensely dislike. Brown gnolls are wary of dogs and Striped gnolls have a shared animosity with foxes of all kinds. Aardwolves live in tiny, family sized pack-clans unlike the others. They rarely mix with Flinds but sometimes will care for an elderly one.

All gnolls believe their own creation myth, which revolves around the sacrifices of two heroic humans and two hyenas which fused them into a single creature in order to survive the ordeals. They believe that it is their destiny to reforge the pack-clan and return to a state of bliss as human and hyenas, again.

Many human and demi-humans doubt this creation myth and instead choose to believe that gnolls were created by a mad worshipper of Yeenoghu. Gnomes and trolls are the exception, they believe in the gnoll creation myth whole-heartedly. Kobolds find this story horrifying and tend to believe the pack-clan myth.

Female gnolls are dominant in the pack-clans. Some of them are given special titles at birth: "Clan Heart" or the more unusually "Heart of Hearts". This second term would be better translated as "King of Kings" or as the gnolls see it, "Queen of Queens". Male pack-clan members may be granted the title "Revered" for special service to the pack. Gnolls do not understand the human title "King of Kings" and would not give an impossible title to a mere male. Male gnolls do not have any concept of siring pups and are called "mate" by the non-dominate female pack-clan members, as in "clanmate" or "packmate". Fighting males receive the first title, while wily and intelligent males receive the second.
Posted by Phil Viverito at 4/07/2019 01:07:00 AM No comments: