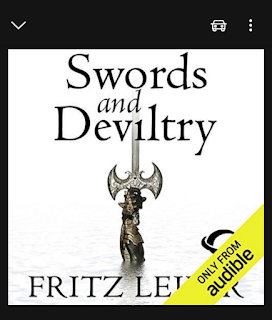 In 2022, I would like to add a lot more fantasy to my collection of book reviews. Today, I look at a classic by Fritz Leiber.

Swords and Deviltry tells the story of The Gray Mouser and Fafhrd's first meeting in 4 short stories that Leiber weaves together into an excellent novel.

If you have never read Fritz Leiber, his prose is clean, poetic, and fine. This is the perfect book to listen to via Audible as Jonathan Davis's voice is amazing. At the outset, I had my doubts because the book has an introduction by Neil Gaiman, whose voice sounds like golden whiskey to me. Davis sounds plain by comparison, but his care and tone with the characters is perfect. Davis does not do "voices" for different characters, but his style of slightly changing his voice while adding subtle tones conveys so much.

As mentioned before, this "novel" is 4 stories assembled in novel form. They were originally separate short stories for magazines. I have provided the date of publication next to each one:

Induction was the primer on the world of Nehwon and was only about 300 words long. It wasn't really necessary to include it, but Leiber was building epic characters so the magical world of Nehwon needed to be set.

The Snow Women dealt with Fafhrd's family issues and lovers. Fafhrd leaves his lover Mara behind to adventure south the sultry actress Vlana. Fafhrd danced delicately between the two women and the magic, onuses, and curses sent by his mother and her coven. Davis, the Audible narrator really shines in this presentation, giving voice to both Vlana and Mara. His tone and tempo convey a sense of drive and passion in these characters. You can almost hear blushing, eye-rolling, and pursed lips in his delivery. This was very important to the presentation of Fafhrd, who has what could be described as a feminine voice himself. At no point is this confusing to the listener. On paper, in prose, these characters are driven and strong, no doubt about it. Both renditions were excellent but I was surprised at Davis's performance in the audio version.

In the 3rd story, we meet Mouse as the apprentice of the magician Glavas Rho. Mouse is torn between what type of magic he wanted to pursue. Mouse, as read by Davis becomes stronger and more solid as the performance and story progress, which seems to have been the intent of Leiber writing of him. Sure, but not cocky, determined at first and later driven describes Mouse's transformation. And what a transformation it is. His hand was forced as the Duke slew Glavas Rho while capturing the poor Mouse. As a captive, he discovered the Duke's daughter, Ivrian was also an apprentice to Glavas Rho. Using her as a conduit, he escaped torture by casting the darkest black magic at the Duke.

And finally, in Ill Met in Lankhmar, the Gray Mouser and Fafhrd bushwacked a pair the thieves on their way to the fence some items at the guild house. Realizing they are kindred, the two adventurers join forces to infiltrate the thieves guild. Unfortunately, their loves pay for their daring and are killed, setting the Gray Mouser and Fafhrd on a path of vengeance and adventure.

This collection was the very start of the duo that really shaped sword and sorcery fiction. Six more books followed these first adventures.

I cannot suggest Swords and Deviltry enough. I would hope that the book is available at your local book store, but if it isn't click the link to search AbeBooks.com.