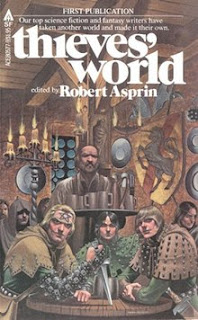 Ah, John Brunner. Between 1970 and 1975, Brummer penned 9 novels. Some of the finest works of SF.  In 1978, his short fiction work, Sentences of Death was the first short story of the first book in the Thieves World collection. And what an open piece it is.

We meet Sanctuary's gritty streets and self-made fortunes through the eyes of scribe Melilot and his young protege Jarveena. Using forgery, blackmail, and mistranslation, Melilot fits right into Thieves World with his stable of scribes for hire. Through Melilot's exploits, the reader is introduced to what makes Sanctuary tick and what those ticks do to the people in the city, young, old, and in the middle. The children are the core of commerce in Sanctuary, much of which is exactly what one with think of trade in children. Jarveena is dragged right along with her master's plots.

Jarveena, Melilot's latest scribe has business and vengeance on the mind. A chance encounter pits her against the captain of the guard, Aye-Gophlan and his men who took everything from her. Jarveena craves vengeance and boy, does it work. As if having the criminal mastermind of Melilot at her back wasn't enough, she encounters the mage Enas Yorl who simply seals the deal for her.

The story revolves around a magic scroll that none can read. This little monkey paw of a device winds a tortured path through the story, running from a street urchin scribe all the way to the Prince of the city.

As per the typical fare for Thieves World, winning isn't always a good option as Jarveena and Enas Yorl discover. Sentences of Death is artfully crafted and while grim, is an excellent primer for Thieves World.

In the review of these stories, I'd like to link them back to classic D&D. While scribes don't exactly fit as a class of D&D character, the function could be fulfilled by Magic-Users, Clerics, and of course, Thieves. Enas Yorl is accursed, which is an interesting take on a magic-user. Some of the other magic in the story hints at Dimension Door and Polymorph (large writ) while Aye-Gophlan's behavior and beliefs tend to model closely to poor characters just trying to get a leg up while being deluded as to their station in the story. 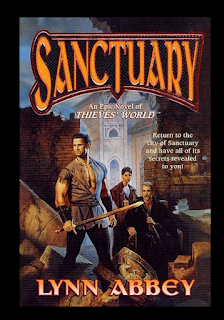