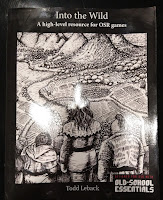 I ordered Into the Wild by Todd Leback aka Third Kingdom Games. I've really meant to use it sooner than now. Over the weekend, I rolled up some OSE characters and got brewing.

I had to develop my own map, which is plenty large enough for a long series of play sessions.

As per normal, the setting is my own, based on Rome. This is a rough map based on the island of Corsica (EDIT - no, it's not). The red hexes are 30-mile hexes, the sub hexes are six miles because I really have a rough time with scale. I am using Worldographer for the mapping and somehow botched my math. I'm no stranger to screwing up math. Corsica is 114 miles from north to south while this map shows it as over 150 miles. (EDIT - This is true, but I scrolled down too far on my map and I am looking at Sardinia, not Corsica. You can ignore the next sentence.)
I think I goofed on the proportions of each hex, which per Worldographer is 46.18 tall by 40 wide. Still, I like it. It's based on the island of Corsica but is a fantasy version of it. So math can take a hike.
The characters have a couple mission targets. Item one, restore the lost Western Marker of Terminus. Item two, map the region so as to find the best place to hunt rock seals. Third, it would be handy if sources of freshwater were known.
Since this is a test mission, the characters have been dropped by a lembus, a ship type similar to a trireme. They are meant to carry men or cargo. This one is named the Zypher, however, at some point in the recent past, it was used for cattle. The party has been bothered by seasickness and the smell of cattle sparked a new secret name for the ship, "The Heifer". They hate it.
The party will start on the northeastern point of the island. The party of 8 adventures is not the typical group having a paladin, a cleric of a different sect from the paladin and thief who annoys everyone by aggrandizing theft. The only thing the 8 agree on is they hate sea travel and want off the ship.
The party's initial goal is to work their way down the eastern side of the island, with the Zypher popping in to check on them. They built a small hut at their landing point and will proceed south with only two pack mules in support. They do not have the supplies or capacity to climb mountains, so not every hex will be explored this time around.
If the party is successful, they will meet the Zypher in a week or so on the southeastern point of the island. If unsuccessful, the Zypher will scout the coast looking for survivors.
Wish them luck!
Posted by Phil Viverito at 1/31/2022 08:00:00 AM No comments: