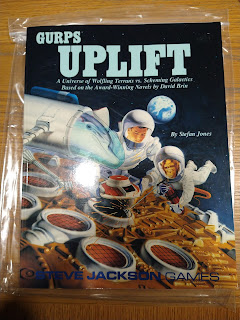 Ok, I am taking a break from novels and switching to games to review. This one is a trick review. I don't play GURPS, I've never played GURPS. It's not that I don't like it or anything, it is merely outside of my experience.

Having said all that, I'll point to that 5-star rating right now.

Here is what I know: GURPS or the Generic Universal RolePlaying System is one of the most, if not the most successful RPG using a common rule set for a variety of settings. To get the most out of this book, you'll need The GURPS Basic Set, and players will find a lot of help from GURPS Space and Ultra-Tech. All of these are available through the links at DriveThruRPG.

Hopefully, from my reviews of Sundiver, Startide Rising, and The Uplift War, you have gotten a sense of the types of stories David Brin weaves in his Uplift double trilogy.  From David Brin's forward, Brin is an avid gamer and was interested in doing a series where players' actions were complicated and nuanced. This was written in 1990, but as I flipped through this work, I see that there is information that would not have been available to those reading the novels at the time. It's not a huge amount, but it is interesting. Gene raiders, Jopher, and E-space come to mind.

The author, Stephan Jones breaks the book into 8 sections, starting with The Uplift Universe and moving to more and more detail with characters, which include some pre-generated characters from the novels. From there, we dive into the culture in the chapter Family, Friends, and Foes, before digging into the concepts of Uplift. The last four chapters cover the various forms of technology and travel plus two chapters about campaigning and adventures.

The entire book has dozens and dozens of pictures, all of them pretty standard for the 1990s. The main advantage of these images is it depicts what Brin described in the book. I don't foresee a series of movies based on these works, but Xandar in the Marvel films is kind of close.

While I already mentioned that I am probably unqualified to rate the rules in this set, I do want to focus on some of them because of the setting. In Brin's Uplift series, the sophonts are living on the bleeding edge of technology and biology.

The cover depicts a dolphin in space, after all.

In some ways, there is little to differentiate technology from biology and dolphins are a prime example. They have walker shells and manipulator arms that they wear on land or in space. They suffer very little from their environment, although they can't climb trees. The rules make sure that some of these odd cases are outright disallowed but in some edge cases are perfectly plausible. For example, Chimpanzees are rotten swimmers in real life, therefore Chims in the Uplift world don't swim at all.

Brin stuck to the basics of reality when coming up with these limitations and they are all well thought out in this book and the novels, even the fantastic ones. Jones continues that in fin fashion. Dolphins were known to use tools back in the 80s, so robotic arms are not so fantastic. Chimpanzees were once thought not to swim, but it appears that they may not be the strongest swimmer but can if they desire. They also possess an ability that humans don't have, they can sink to the bottom so they can walk and hop through deep water, like a human in a wave pool. It is unclear if Uplifted Chimpanzees can or can't swim, the ones depicted in the novels don't like to get wet and usually take to trees rather than going down into major water obstacles. What is interesting in the books is, so Chims are mortified if they startle and jump in a tree or other perch for safety while others view it as a tried and true escape tactic.

These approaches to games are great. I've almost sold myself on a set of GURPS books. I hope I sold you, too.