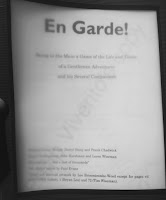 Title: En Garde!
Design and development: Darryl Hany, Frank Chadwick, John Harshman, and Loren Wiseman
Editor: Paul Evans
Year: 1975, 2005
Pages: 88
Rating: 4.5 of 5 stars
We are from France! 17th or 18th century France.
En Garde began is a fencing simulation and scaled up from there. It has more in common with Chainmails's Jousting rules and Star Smuggler or Barbarian Prince's time tables than D&D. This is rather refreshing.
The rules are a detailed walk through this fantastic version of the 17th or 18th century. Your initial character build will require reading or skimming the entire book. While this may seem like a round about way of getting to character creation, the rules are so different than other games that the slog is totally worth it and completely understandable. The system requires no gamemaster, as it is result table based. It could support a gamemaster, if storytelling was desirable.
I have also heard of people converting the system to an index card game for solo play. While not intended for this purpose, the results-ruling system lends itself to this. Where it falls down is the actual fencing rules. Random really isn't good enough for "reasonable" game play. However, I could see "building" a deck of index cards for certain NPC players so that they are semi-random in their actions, but still have believable drives and actions.
Once your character or characters are built, it's time to plan. The time scale is a week of highjinx. You can duel, slum, or run off to war. Or find a mistress... Or two, if you're brave.
The whole game revolves around picking tasks and attempting them with flair. Combat is deadly, unless your a yellow-bellied cad. Interestingly, since there is an honor system in place, you can avoid death by being a jerk. That's has ramifications for your character.
You can get going with En Garde in about 2 hours. However, the game itself can go on forever. In fact, there really isn't a concept of party, its a social group. It's a great one shot system if at least one person knows the rules, which could turn into a session icebreaker for those who have flagging interesting the main "show". The system is quick with clear "break points" where the players can pause the action for another day.
I found this game to be engrossing and engaging.
I've been aware of this game since the 1980's, but only had a chance to pick it up during the pandemic. I am not aware of the rule changes that came between the original rules  and current 4th edition.
One of the downsides of this game is the fact that there are clear gender roles which are asymmetrical. Personally, I play a rather "gonzo" style of play where I would simply ignore the fact that women aren't meant to be playable character and just roll with it.
En Garde! is from UK based group. You can find it here from the manufacturer.
Posted by Phil Viverito at 6/25/2021 02:04:00 PM No comments: