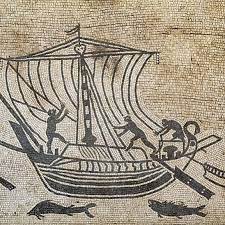 History is loaded with entertaining and surprising stories. Some of them are just as interesting as movies are now-a-days.

Today, I like to share the story by Plutarch of Chaeronea about Young Julius Caesar and the Pirates.

The Romans were never the greatest sailors so piracy was rampant in the Mediterranean. It didn't help that the pirates would take prisoners and sell them to the Romans, so they very people who should have put a stop to the practice were instead benefiting from the pirate's activities. At least in the short run.

The Cilicians were a group of pirates allied to Mithradates of Pontus, an enemy nation. The Cilicians would ransom the rich prisoners and sell the poor as slaves, which is evidence of the often short sightedness of the Romans. They were filling the coffers of Mithradates and damaging their own citizens when purchasing slaves or buying freedom.

Enter a 25 year old Julius. He was taken captive in 75 BC. The pirate captain demanded a ransom of 20 talents for the return of Julius. Julius laughed. He demanded that they ask for no less that 50. The captain, of course, agreed.

So began 38 days of wackiness. Julius joined the crew in their duties, cleaning and maintaining the ship. He organized games and physical contests with the pirates. He wrote poems and presented them to the crew. If crew didn't recognise his great work, he'd call them illiterate and threaten to hang* them. The same threat was issued if the pirates were too loud while he was sleeping.

After 38 days, the ransom was paid and Julius was set free.

Julius raised a fleet of ships and captured the Cilician pirates as they sat anchored at the city of Miletus. The pirates were all taken captive and marched before the Governor of Asia, a man named Marcus Junius for punishment. Junius hemmed and hawed about punishing the pirates as they were a source of revenue.

Annoyed, Julius marched the pirates out to the coast and had them all hung*.

It sounds like the bit in the Princess Bride about Dread Pirate Roberts and Wesley, from a different perspective. If you assume they are the same story, Wesley becomes a different sort of character. Very often, historical stories like this make their way into my campaigns.

*Hanging as a Roman punishment meant crucifiction. Romans wouldn't bother with rope if they meant to strangle someone. They'd use their hands. Strangulation fell between crucifixion and defenestration, throwing a person off a building or cliff. The Romans codified everything.