Ever have one of those players that creates a character that just doesn't make sense? You know the kind. The person who shows up with a Chaotic Good Assassin.

Actually, this story is not about me. Well, sort of.

I did create a Chaotic Good Assassin as a part of a party tasked with killing off the evil overlord of the land. I can't remember the lord's name but let's call him Lord Farquaad.

Now for the setup. I was late for the session that night and missed the bit about killing the lord "someday". Since I was late, the DM handed me a set of pre-generated stats. I was only allowed to shift scores around or swap points for prime requisites so I didn't have the stats to be anything interesting.

The DM looked mulled over my sheet while describing the villain and prompted me to fill out a character description. You know, the boring eye color, hair color, skin color, etc. Since he just described the lord, I simply wrote down what DM said. Since I just pulled a fast one with the alignment, I didn't wait to draw attention to myself by flat out stating that my assassin character looked just like his quarry, Lord Farquaad.

Right off the bat, I had a humorous way of wrecking this campaign and went for it. My character infiltrated the castle and promptly failed to kill the lord. The only person to see my assassin was Lord Farquaad and the would-be assassin managed to escape by a dangerous and inexplicably lucky leap into the moat.

Rather than getting upset by my shenanigans, the DM ran with it. Since Lord Farquaad was hunting just one obvious assassin, it gave the party all kinds of opportunities to bushwhack him. Ultimately, the lord survived all of these attacks and went on a crazy, bloodthirsty hunt for the party. He used my foolishness to really make this lord despicable.

That's where my rouse kicked into high gear. The party fled to the silver mines. We infiltrated the lord's own most secure outpost posing as guards. At this point, my character's secondary gambit was discovered by the DM. A Magic-User was detecting alignments on new guards and the DM was non-plussed to discover my assassin wasn't evil.

Where it became laughable was when my character got his hands on some forged paperwork that said his name imperfectly matched Lord Farquaad's. His cover story was his mother had a tryst with Lord Farquaad and she had high hopes for becoming the legitimate Lady of the Kingdom, to the point of naming her son "Lord Farquaad". His first name was actually "Lord". This got snickers all the way around the table.

Suddenly, the whole theme of the game shifted to a ridiculous, fantasy version of the film, "Catch Me If You Can".

Now here is the really funny part. I didn't come up with this on my own.

There was a family friend that had a name that matched a landed person in England from the 1700s. In the early 80's, the UK did something that I can only equate with an "estate last call". They wanted people to claim abandoned estates so that they could get back to collecting taxes or clearing their records for sale or perseveration as needed.

This family friend was big into genealogy and laid a claim to an estate back in England. It was kind of a big deal. He managed to provide all of the documents necessary to back up his claim as his family had the same name and this particular Englishmen did visit Western New York.

It turns out that this landed gentry from England came to New York in search of a criminal. The criminal escaped all attempts at capture by taking the name of the Lord pursuing him. Annoyed, Lord went back to his estate empty-handed.

Here is where the story goes south and where the U. S. Government got involved. It turns out that this family friend was not related to the Lord, but the criminal quarry. Which he was fully aware of, it's is kind of illegal in rather surprising ways when you seem to have documentation that says one thing, but the reality is another. Forgery isn't always required to produce "correct" documentation, sometimes hiding contradicting documentation is better than an outright fictional document.

I'm not sure where the B.S. starts and ends with this story as this story is about the 1700s criminal leading to a land claim in England in the early 80s. I would have been about 8-11 years old myself. While I was aware of what was happening, I didn't really understand. While it's funny enough for people to retell, it's the sort of story that gets changed with every telling.

Email ThisBlogThis!Share to TwitterShare to FacebookShare to Pinterest
Labels: AD&D, Assassin, D&D, IRL, off the rails

Assassin of the Empire

In my campaign, the Assassin in the Guild operate more as spies than killers. They are the secret police for the Emperor, persevering the peace through whispers and intimidation. Since the Human Empire is at war with dwarves and elves, assassins have a noticeable inability to infiltrate these societies. Sleep and height basically preclude it. Silly, but reasonable. They aren't sidelined by this lack, instead they keep the roads clear for the troops and citizens alike. They handle messages at all levels of government and even provide a private mail service.

In this campaign assassins tend to work like urban and rural rangers, where the road between counts as a part of the creating town or village. Why not simply make them rangers? Because rangers operate completely without support in the wilderness, where as assassins and spies use and misuse resources already in place. Assassins require civilization to abuse, while rangers don't care about what everyone else is doing. Some of their skills collide, such as being knowledgeable about the lay of the land, habitation, trails, roads and alternate routes. But assassins can only work when they have the civil pact to violate. An assassin the woods is just as lost as a ranger in a church or temple.

Assassins will know the roads, the towns and the important places within the town. They are often attached to patrols to act as guides and reporters to civil agencies. They know the important people, and not just the people that think they are important. Assassins know the right scullery maids and court clerks. Rangers know different facts, which are clearly not in the same circle.
Posted by Phil Viverito at 5/11/2020 12:49:00 PM 2 comments: 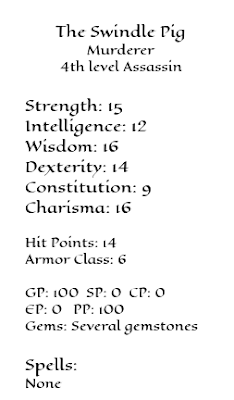 These 3 first level characters are Assassins, Felix, Laelia and Philo. Click the link to download the PDF file. These characters are almost ready to go. In generating ability scores, I made sure the range was acceptable in both D&D and AD&D. To convert these characters to straight AD&D, simply add or subtract the racial modifiers and class abilities.

In my campaign, Assassins make up between 10-20% of the human Empire's Legionary. These characters have far more than a typical adventurer would have owing to the fact that they are professional soldiers. I will post again with a better explanation of their equipment.

If there is a call for it in the comments, I will make DOCX and Google Doc file available as I have the PDFs. The reason I have not done this from the get go is that I created every character of a class in one document and print each page as a PDF.
Posted by Phil Viverito at 3/03/2020 11:26:00 PM No comments: