Today, things get a little more interesting. I made a small base out of styrofoam and glued it to a sheet paper. I can now use my foam cutter to make holes for the beams to set in.

To assist with the mount of the top beams, I cut a groove down the center of the wooden wall posts. This recess isn't perfectly shaped to the beam but it does provide space for the glue to rest in.

Now it's decision time. Generally, people would have cut down trees then stripped the limbs and bark to get a round post. Do I want to cut these posts into round parts instead of square?

In scale these wall posts are 18" thick while the center posts and beams are less than a foot. That isn't too crazy. Working with my first concept of "found materials", perhaps the abandoned tower used 18" square beams and the current homeowner recycled them. They probably couldn't lift an 18 foot section or the massive 40 beam, so they had to cut down new trees, which explains the two different materials in use.

Having dry fitted everything, I started gluing. For now, I have glued the 5 center posts, the top beam and 12 of wall posts. I didn't glue the end posts because I am not sure where I am going with this. I have two options for a byre house. The end walls can be squared off or curved.

Returning to a bit of realism, a curved wall is harder to construct but is load bearing both up and down and side to side. A flat wall is only load bearing in the vertical. A good push can knock it down.

Both styles are fairly common for a variety of reasons. Strength vs. easy of use. Byre houses can last hundreds of years if properly maintained. Squared off end walls allow the homeowner to easily remove a whole wall without compromising the entire structure. Why would this be a useful feature? The floors were often made of ash and lime over a woven stick construction over a low basement. These floors need to be maintained and replaced, so access down the entire length of the house is a great feature. 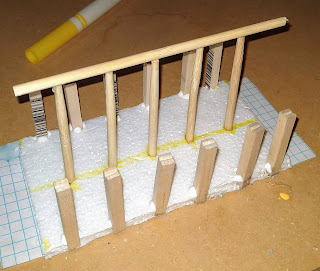 It turns out that some historical examples of these types of houses have the rounded wall in the west. It was often constructed out of logs with the gaps covered over with mud. Since animals were brought in the home for security and warmth, it would make sense to have this stronger, yet airier rounded structure face into the wind. The smell... well. I don't know how they got used to that.

On the opposite side of the house was the family space, it broken up from the animal's space by a wall or a hallway. Since I am not showing the interior in this model, it doesn't matter much. There will be a door in the center of the long walls on both sides.

The eastern, squared off wall can have a couple of finishing pieces. Either it can simply be a flat wall, or have a porch-like structure under the roof, which cuts into the family space but has a door. More modern structures might have a fireplace and chimney which closes off most of the eastern end. I will probably make it as simple as possible.

That's it for today. If you are following along at home and want to try your hand, here are some suggested products from Amazon.com which could help you start your own byre house. Purchasing via these Amazon links supports this site with remuneration.