This is the cutting and sanding post. A byre house is not like a modern house. It has posts down the center line, which is different than what we do today. It also highlights a fact that I have been ignoring.

First, the supply issue. I want to use up materials I have on hand with as little cutting and sanding as possible. Ok, that fixes the second issue of supplies. Second, since I'm only using found materials, I can just throw my dimensions away.

Cool. That's easy and it gives a little historical realism flavor to this build, even though it's a fantasy model.

Here is the center line of this build. There are 5 posts holding a center beam. 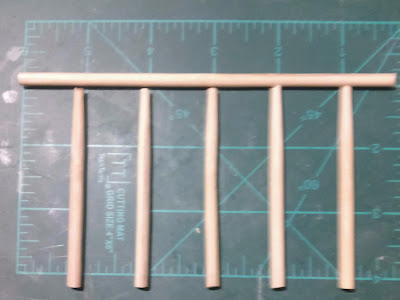 Now, I need to create two of the four side walls. This is where a byre house is interesting. The longest walls run parallel to the center beam. I could make two different mistakes here. I could say "5 center posts=5 posts for each of the walls". Except a byre isn't built like that. The second mistake I could make is "5 center posts leave six spaces... so I need 6 posts on the outer wall". That's also wrong. The correct answer is 8 posts per wall. These posts would be located between each center line post and have one at the corner of each run of the wall. 6+2=8 per long wall for a total of 16.

So I cut my 16 posts from basal wood and the ends came out ragged. He's how I fix this.

Well, I pull two out. Those posts are square, so I can now fold the whole thing in half. That gives me 2 rows of four, so we are back to eight posts. I trimmed up the tape and used the cuttings to secure the middle of this rectangular block. 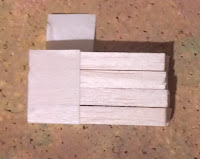 This gives me a convenient shape to hold on to while sanding. It's a nice rectangular block. 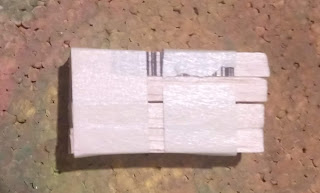 I'll repeat this for the other wall and get standing. Just an fyi - I'll sand these two blocks side by side, so they will be the same. If I did them one at a time, they would just end up two different lengths. I wouldn't know anything about that mistake....

I'll be back with the end walls soon.