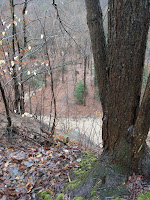 I collected some reference images for my model. These photos are from Western New York, so they will have a different tonal quality than a European setting.

The first image from Schoellkopf Scout Reserve.  I like the mossy areas. This view is looking down on Cayuga Creek, which looks small but can flood rapidly. 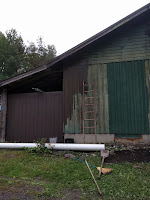 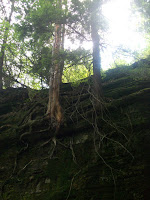 The next image is from Panama Rocks, New York. This is a completely different geologic formation. It is the ancient coastline of the Appalachian Basin, during the Devonian. The entire continent was rotated 90 degrees, so this would have been the northern edge of this sea. Later, the glaciers cut the rock away into these dramatic formations.

The final image is of an old barn at Schoellkopf Scout Reserve called the Quad. I spent a couple of day repainting it with some other parents.

With these 3 images, I now have my color pallet. I'm going to be using some basic acrylic paints. I used slate grey, leaf green, forest green, chocolate brown and cadmium yellow.

Intitially, I thought I'd show each color as I went, but that didn't work out. I started with my slate grey which went as expected. I covered all of the edges, except the back one, which I think I'll color blue. I'll be the only one looking at that side. 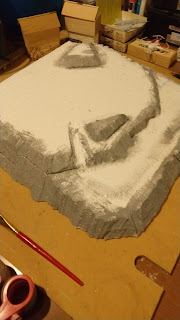 You can see I roughed out the road and placed a few splotches of grey on the flat surfaces. The grey looks rather chilly with all that white. I'll have to do something about that.

When it came to the next colors, they all represent several things - dirt, mud, dandelions, grasses, etc. Except for the road, those are random. I drizzled the browns along the areas for roads and paths, plus a few "burned in" places where people might naturally stop.

I quickly realized that I couldn't fade these browns out into the unpainted areas as mud and dirt is under the grass. I had to work the opposite direction. I drizzled the greens and dropped splotches of yellow and worked the other direction, into the paths and roads.

I think this came out nicely. Now keep in mind, I use flock for my models. All of this paint will be covered my a natural looking material, except the grey areas. That will get a different treatment. 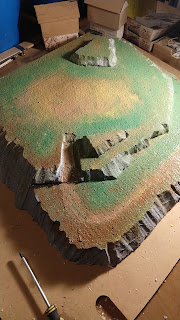