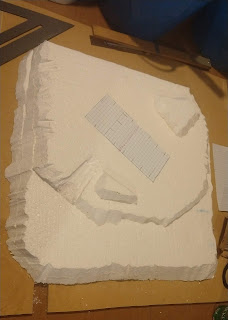 Before I start painting, I need to "stage the action". I want to be able to reuse this space for a variety of things. The first image is just the base, with a template for a 25 mm Byre house. That's the paper in the middle of the image. It's 7 1/2 by 3 1/4.

That building will occupy a lot of space on this 18 or so inch base. I envision a small privy house and perhaps a chicken coop. 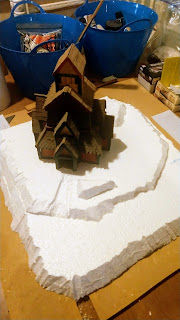 This is a Stave Church in what I call "epic scale". It's can do double duty for both 15 and 25 mm scenes. My dad made it from scratch and it is almost as old as I am. This one has appeared in many of my D&D campaigns.

This stands about a foot high and maybe 8 inches square. It is in rough shape and I want to fix it up. 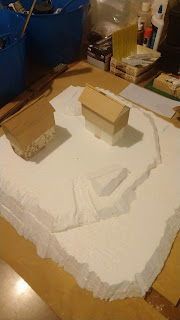 This next scene contains two "epic scale" houses I roughed up out of blocks of balsa and styrofoam. As you can see, this space is large enough for many structures.

This configuration will also probably include a privy house and a garden. 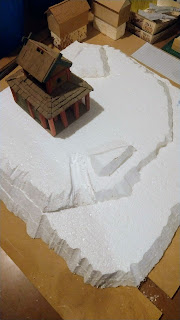 This is another church, probably exactly 25 mm scale due to the details. Again, it was made by my dad and is easily 40 years old. It also needs to repair work. It has been the center piece of many, many wargames. The opening in the top is for smoke, my dad would place an incense cone inside for charm. I would probably add a series of small huts and a garden to this setup. 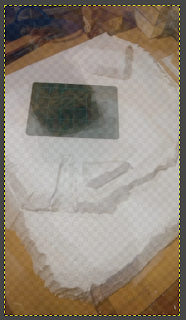 There is a trick in astronomical photography called stacking. It allows you to build details for an image by using multiple images to enhance an image. I started with a road cut into the hill as a reference point. By stacking all of these images and reducing the detail, I get a hazy image which show where the edges of all the buildings are. I can use this edge to know where to put my muddy paths and such.

Normally, I'd just pencil this in by hand, but it would be hard to photograph. I added one image of a cutting mat to make this area "harder" and easier to see.

Now I'm ready to paint the base.